I was awake before 6:00 a.m. but persuaded myself to go back to sleep, leading to a really weird dream which then caused me to get up at 7:00 in hopes of avoiding any more dreams about working in bookstores and Monopoly games.

I got complaints about how noisy I was being and Ken got up by 8:00. We packed and headed to Tecolote, a Diners, Drive-Ins and Dives restaurant. We got there a little before 9:00, and only had a half hour wait, which was really pretty good for a holiday weekend Saturday, we thought. What a cute little restaurant.  The room we were seated in was dedicated to the family’s Grandma, who had made all of the needlepoint pictures on the walls. Tecolote means owl, so there were lots of owls, both knick knacks and paintings.

I had the Huevos Yucatecos (featured on DDD) and Ken had the short stack of pancakes. I would hate to see the tall stack. You also get a bread basket, with muffins and biscuits. 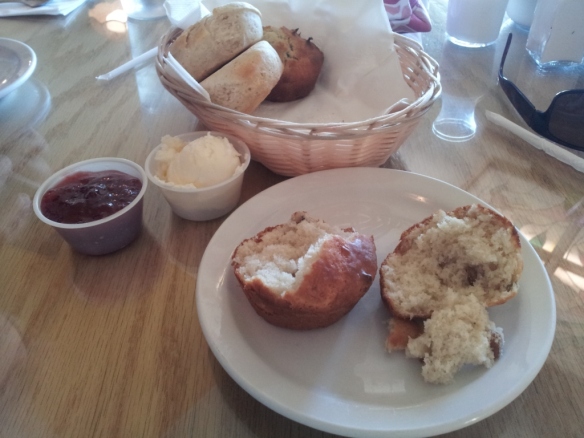 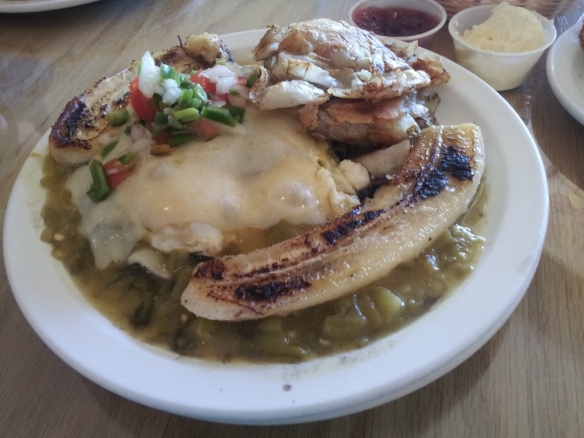 They were awesome. The jelly with them was delicious. I wish I had a baker to make muffins for me every morning. The Huevos Yucatecos were also great. The fried plantains were also very good. 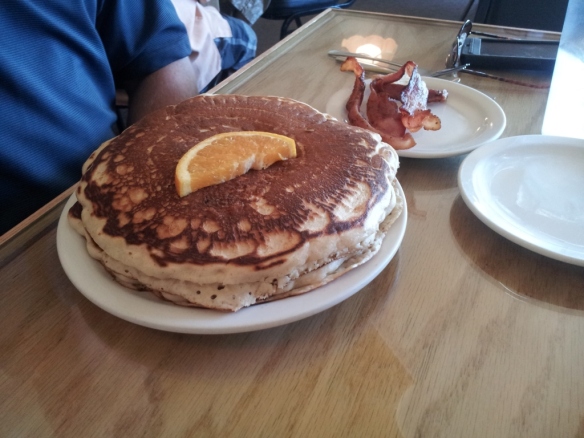 It was all good; Ken liked his pancakes, too.

Fueled up, we got on the road, with a slight disagreement with General Custer over the way she thought we should go. The trip between Santa Fe and Albuquerque was pretty uneventful. Gas seems to get cheaper the further south you go.

I had looked into things to do in Albuquerque before the trip but hadn’t really organized an itinerary. I lobbied for a stop at the National Museum of Nuclear Science and History. I am into that kind of stuff. Growing both close to an air force base and in SD, a state which was riddled with missile silos, I was pretty sure, when I was a pre-teen and teenager, that we would be taken out in a nuclear attack before I was 20. So I am interested in the history and pop culture surrounding the nuclear arms race and Cold War. It was a good museum.  They have quite a graveyard of bombers and missiles, which is a good place for them. They call it “Heritage Park.” Here is a list of the planes/missiles/etc: http://www.nuclearmuseum.org/see/exhibits/heritage-park/ 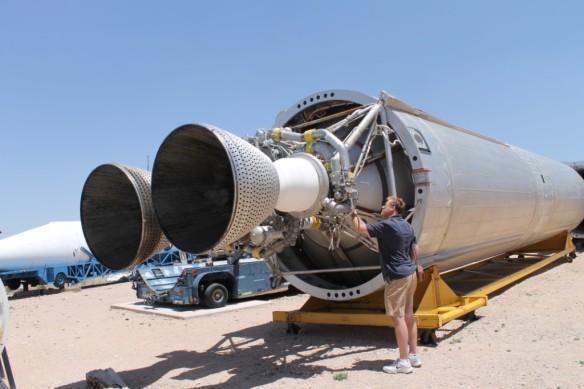 You can get up close and personal with the rockets and missiles. I believe this is the Titan. 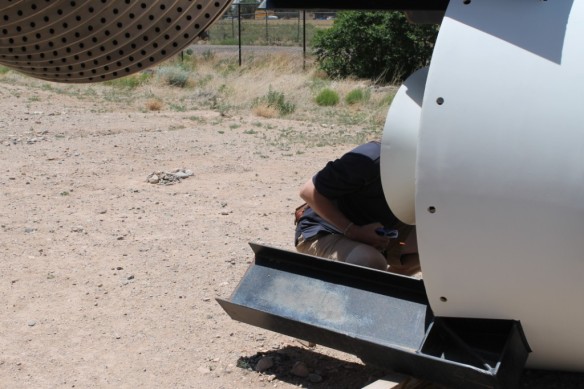 Honey, don’t stick your head in the rocket engine. 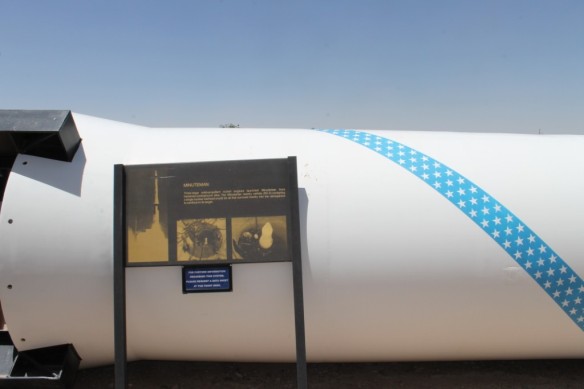 These used to be far more common in South Dakota. 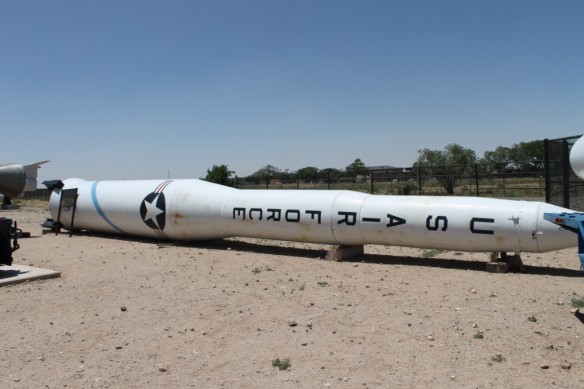 Full view of the Minute Man missile. Not one of the larger ones there but still effective.

Honey, why are you in the bomb bay of that plane? 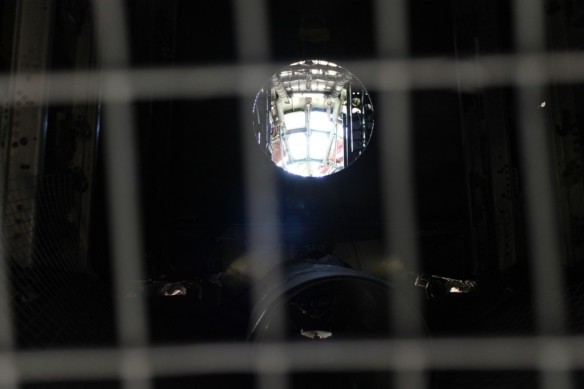 Oh, you’re right, that is an interesting view out of the front of the plane from the bomb bay.

Is there a website for “Geek Travel Destinations”? Perhaps I could create one.

Bought a book in the gift shop – Spy’s Guide to Santa Fe and Albuquerque, which I didn’t think I would be able to obtain easily outside of NM.

We were moderately hungry at this point, and I had decided it would be a DDD day, so we went to the Standard Diner for lunch. I had the Country Fried Tuna, and Ken had the Meatloaf, both of which had been featured on the show. I also tried the Watermelon Tuna ceviche. 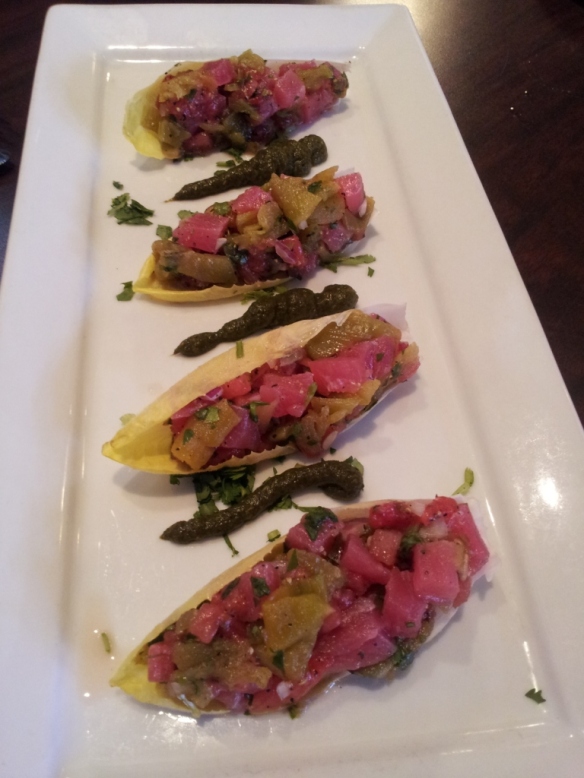 The ceviche was interesting, but the endive leaves it was served in added a taste I didn’t really care for.  Plus then I was really full, the fried tuna came with a side of cous cous which the waitress hadn’t know about, so it was plenty of food. They didn’t have the wasabi guacamole because it was too early in the day, but I liked the Country Fried Tuna quite a bit. The couscous was good and spicy (sriracha, I think) if not very evenly cooked. 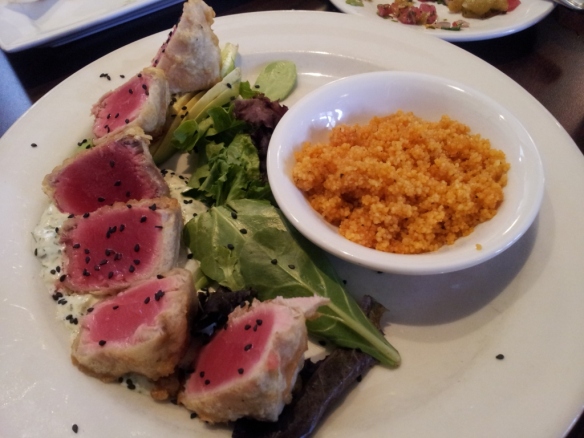 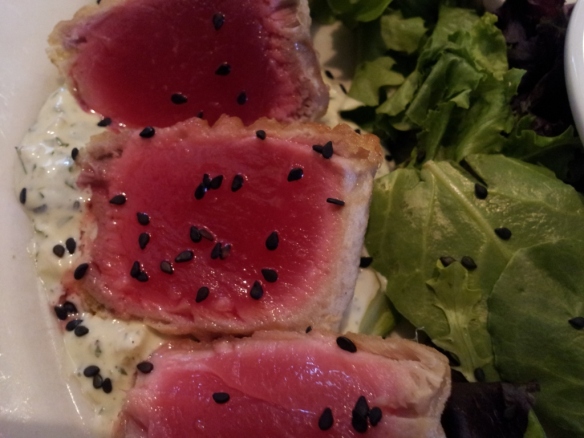 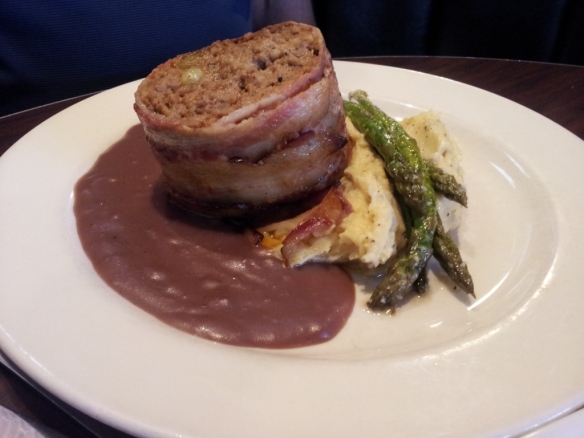 Ken said the meatloaf “Finer Loaf” was good. The desserts looked great but I had no room at that point.

We went to our hotel, The Parq Central, just a few blocks away from the Standard Diner. It was just off the interstate but you do not hear traffic. This was a former railroad hospital, and they kept the historic building and turned it into a hotel. Our room was actually in the Doctors’ quarters building, behind the main building, which was fine with us. 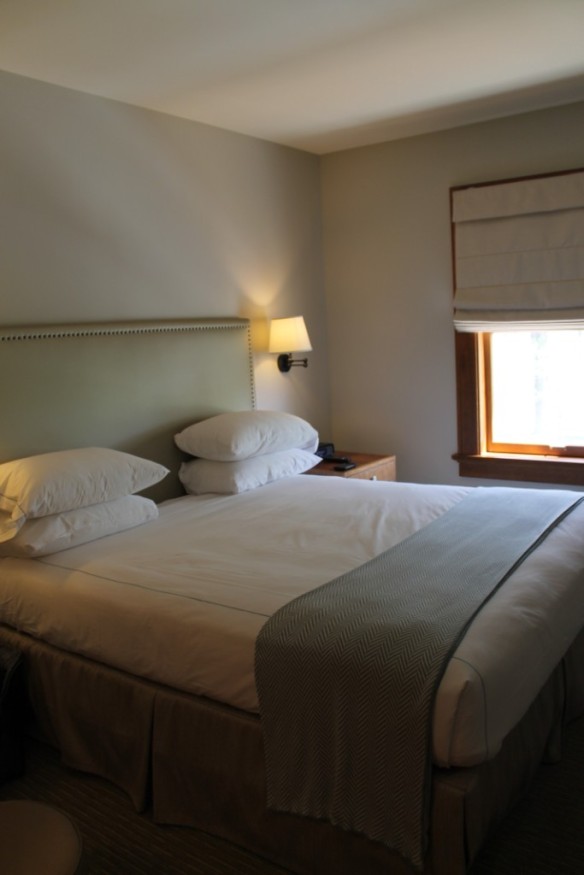 I think it was one of the smaller rooms, but we had booked a bargain rate, so that was OK too. 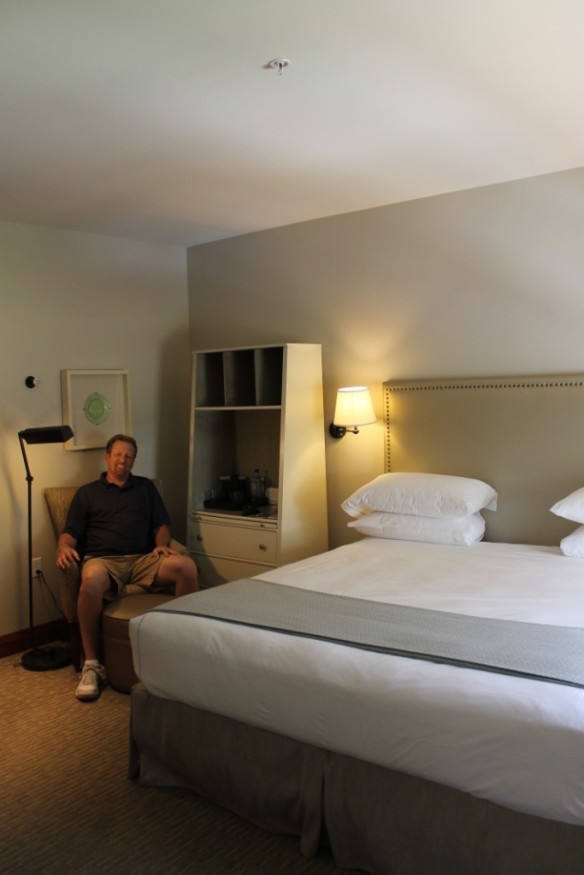 There was plenty of room for us. 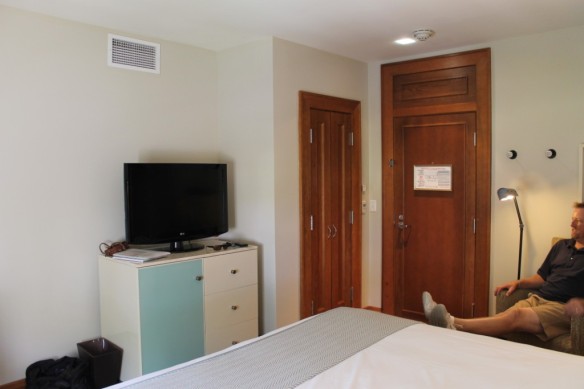 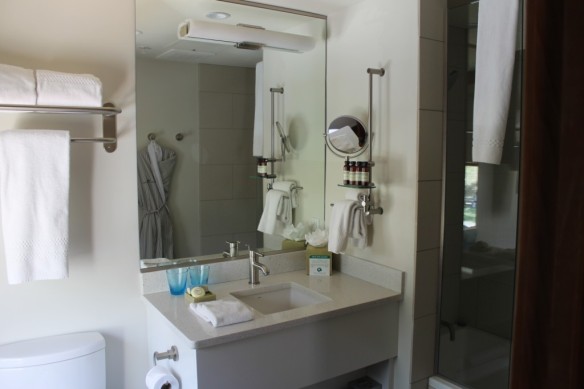 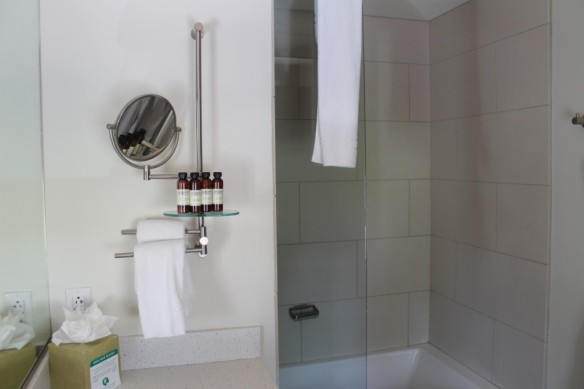 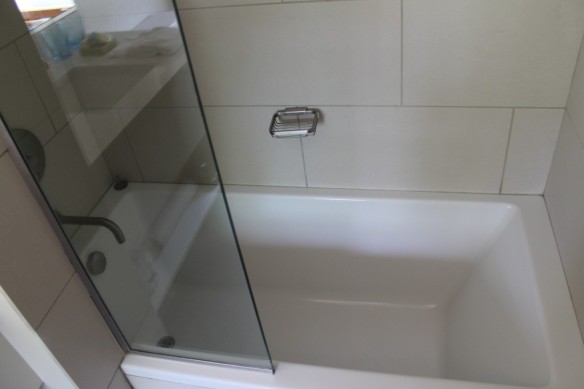 This tub was short in length but you could get the water up to your shoulders, so I totally approved.

We paid $140 for one night and $227 for the next night, which included a round of golf at Paa-Ko Ridge for Ken, normally much more expensive than that, so it was a good deal.  Very nice rooms and hotel for that rate.

We unloaded the car and unwound for a while, and then we went to Albuquerque’s Old Downtown and Plaza area.  We hit a few stores and art galleries. It was really smoky, from the fires in the west. There was a Sno-cone stand so I had a cherry Sno-cone and that made me quite happy. We decided we should get our shopping done for the weekend so we wouldn’t need to come back downtown – got a really cool Day of the Dead golfing figure for Ken (no picture of that yet, shoot), another T-shirt for me, books (of course), some chili enhanced corn nuts and peanuts, key chains for the nieces in Ames, loteria cards (I have no idea what I am going to do with those but they are very interesting), dream catcher for Ken, and a painted corn necklace. 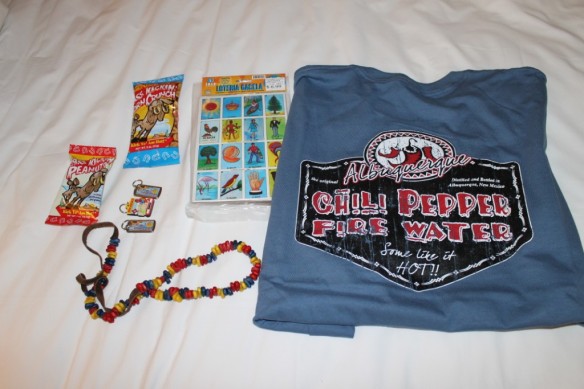 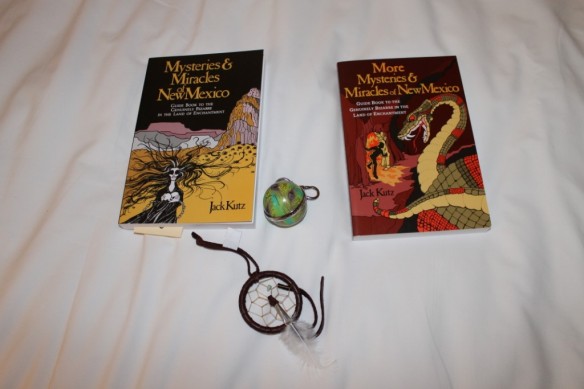 Those necklaces were everywhere, I am pretty sure they were meant for kids, but I am going to do something artistic with those corn kernels. When I figure out what, I will let you know. I found a “Twist and Pout” lip moisturizer. I had seen someone with one of these a long time ago, looked them up on the internet, and then never got one. So I seized the opportunity when I saw on at a gift shop. It is a round ball that clips to your purse so you don’t have to dig through your purse to find your lip stuff. When I have used up all of the lip stuff, I am going to put little tiny knitting items in there.

Now, it might seem like Glenderella gets more souvenirs than Ken, but remember, Ken also gets two rounds of golf.

It was quite smoky in Albuquerque, because of the wildfires to the west. 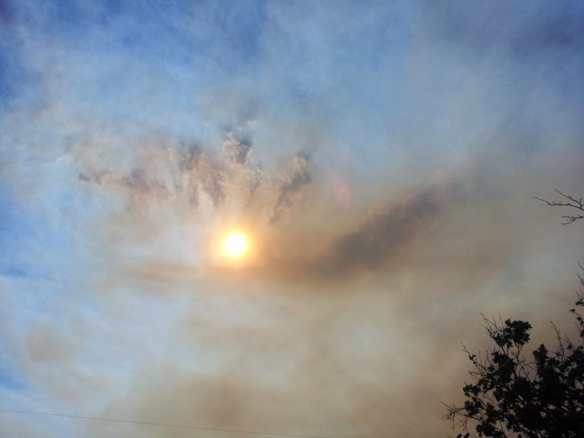 I didn’t really have anywhere picked out for dinner since we had two pretty large meals already that day. We decided we would go to the Apothecary Lounge on the roof of our hotel and watch the sunset and have appetizers/small plates there. That was a beautiful idea, except for the 60 mph wind. Occasionally chairs would blow over. 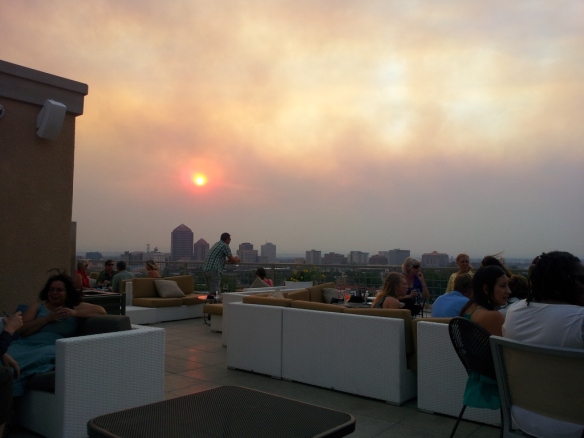 I had my netbook along and was working on this entry, and the computer tried to blow away a couple of times. I had a Pimm’s Cup, which is Pimm’s No. 1, ginger beer, fresh cucumber, a lemon twist and topped with a strawberry. 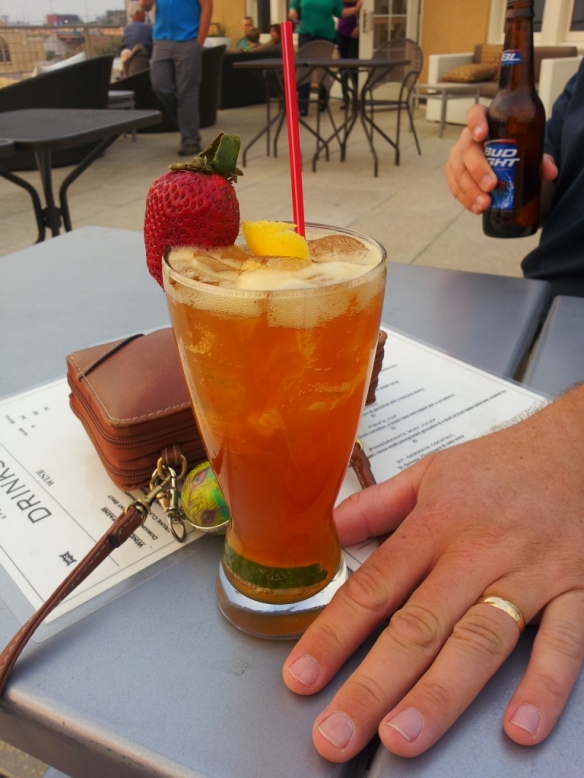 It was excellent. We stayed out on the roof for a while, taking pictures of the sun getting more and more red as it set into the dense smoke, and enjoying the wind (not) and then went inside to order dinner.

I had the soup of the day, which was Roasted Eggplant Garlic. It was good but a little too heavy on the salt. 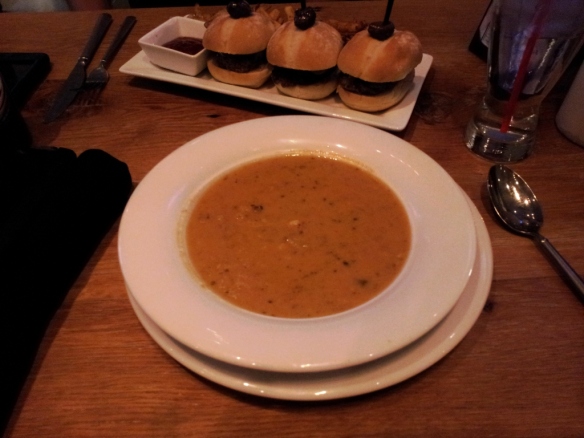 Ken had the Kobe beef sliders with fries and chipotle ketchup, which I liked and he didn’t really care for (the ketchup, not the sliders). 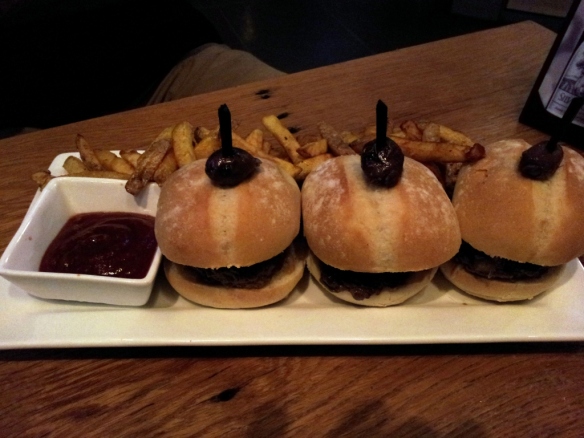 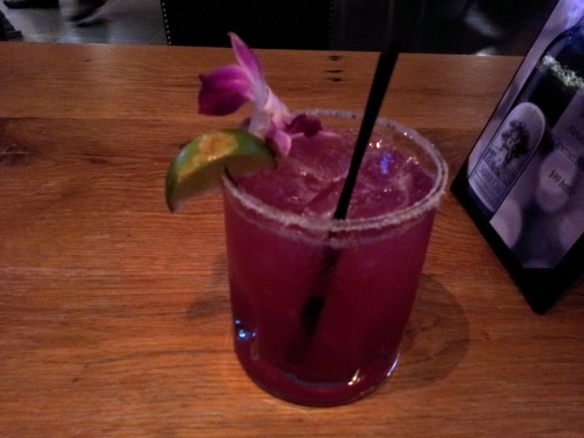 And then we hit the hay, knowing that Ken had to get up to golf in the morning, and it was a bit of a drive up there. 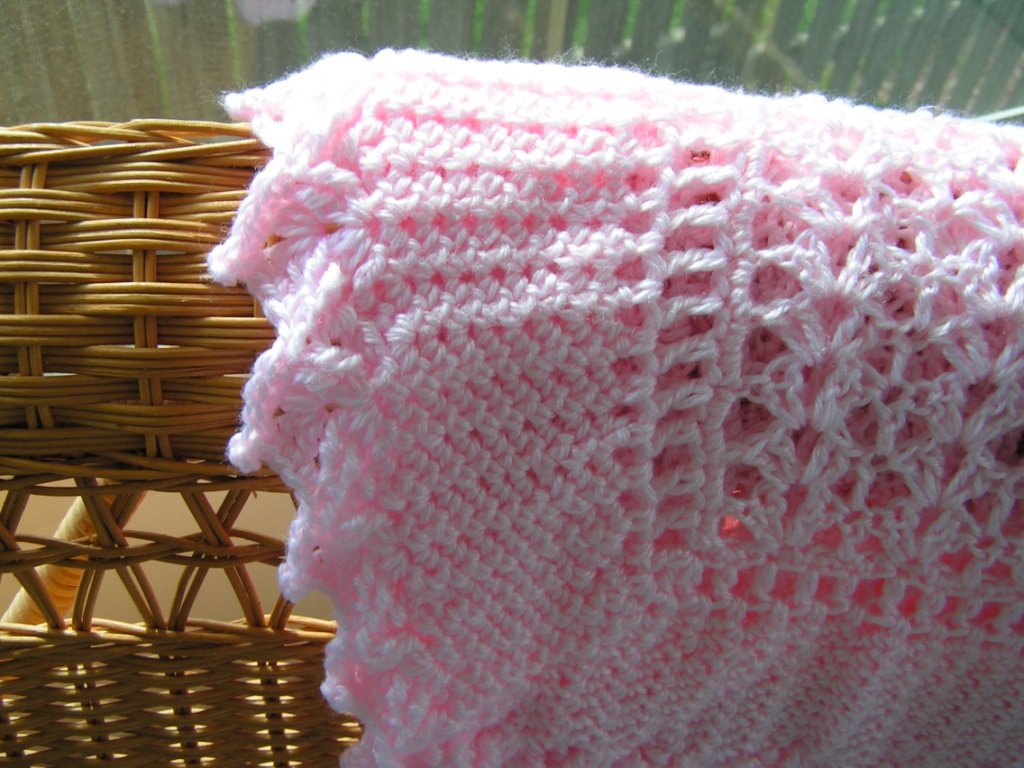