I had great ambition to get up on Sunday morning and make waffles (best waffle recipe here) but then I remembered I had leftover shrimp soup so the waffles will wait until next weekend. Worked on the landscape quilt more (the sky is about doing me in….) and alternated with cleaning up the sunroom and kitchen, finally getting all of the pictures that had been taken down after the October kitchen fire for cleaning and painting. More or less in the same places. I think.

Lunch was steaks with this marinade. It has been floating around Pinterest so I thought I would try it. I would debate it being the “World’s Best” but it was pretty good. It was very windy, and hard to get the grill started. Peeled a bunch of potatoes and mashed them so we will have those leftovers all week. Steaks, cheesy brocolli, and mashed potatoes with pork gravy (out of beef gravy mix, see next paragraph…..)

Ran to the grocery store as we were starting to get quite a list and Ken needed some things for work breakfasts.

Tried another new recipe for dinner. Saucy Asian Meatballs. My picture isn’t nearly as perfect as hers but I did buy a fun new plate at CostPlus World Market to display them on.

I used chicken instead of beef or pork because Sunflower had ground chicken on sale and we tend to eat a lot of beef so a change is good. The meatballs were good, the sauce needed something. Maybe it was just a taste we were not used to. Of course, I determined there was not going to be ENOUGH sauce for putting over rice, so I stretched it with teriyaki sauce, so that probably didn’t help. We tend to like sweeter Asian sauces, so I may experiment next time.

I leave you with a rare picture of sibling cleanliness, on top of the laundry pile. MaryAnne very rarely puts up with this for long. 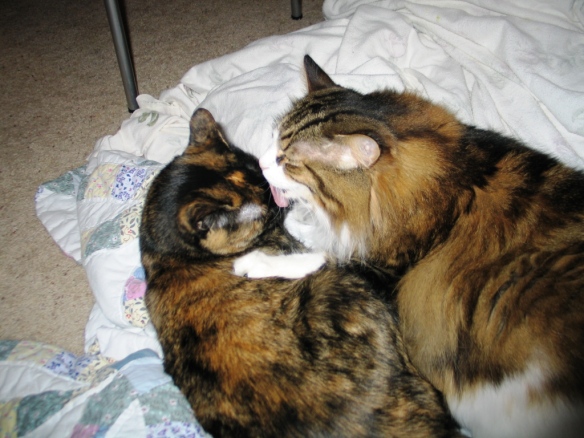 2 thoughts on “Worcestershire: Not Just For After the Shower, for Any Time You want to Smell Like Fermented Anchovies”