It was a busy weekend, starting out Friday night with me making it home in time for us to go to the fish fry at the nearby Catholic Church (the week before, my drive home took an hour and a half, so we were too late for the fish fry, and went to Texas Roadhouse for rolls, large drinks, and steaks instead.) The fish fry was OK. They fried the tarnation out of that fish – it was a little tough for me. Ken liked it. In addition to the fish, there was Kraft macaroni and cheese, fried potatoes, cole slaw, bread and carrot cake for dessert. Lemonade, coffee and water to eat. Only $7 each, it was very reasonable at least. A little heavy on the carbs maybe. :  )

MaryAnne has a new bad habit. She jumps up on top of the entertainment center, hoping to reach down to the second shelf below and get one of her sparkle balls. If she wouldn’t knock them under the washing machine, she wouldn’t have this problem. Needless to say, it is a little startling to walk into the room and see furry gargoyle peering over her realm. There is also catnip on that shelf.

We don’t put her stuff on the TOP shelf, because she could reach that.

She thinks she is quite clever. This is what you see when you walk into the room, feel the hairs on the back of your neck prickle, and look up: 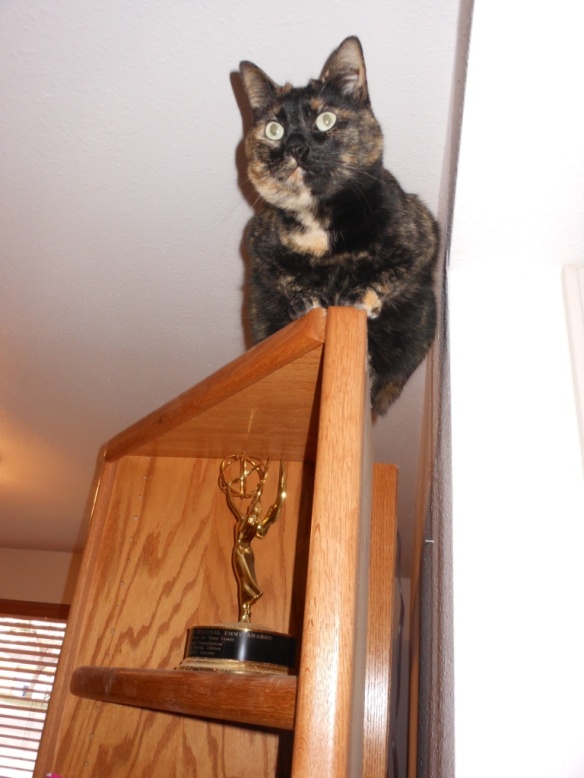 Got quite a lot of knitting done on my Mom’s socks while watching re-reruns of Diners, DriveIns and Dives on various evenings. I am down to where I need to start decreasing on one of them, so I will continue to work on the foot on the other one until I am also that far along, and then start decreasing on both of them.

I also spent some time looking through one of my top well-loved church cookbooks. It is not actually a “church” cookbook, it is the Hendricks Community Hospital Association Cookbook, published in 1993. I believe I purchased it in Hendricks while I was there for an auction, the summer I did repertory theater after college. It has the true mark of a good midwestern cookbook, separate sections for cookies and bars. You know they are serious about their bars if there is a separate section. I think I may have found my long lost favorite lemon bar recipe. I will experiment and post. It is also good to look through a cookbook again after you have maybe set it down for a few years, because your tastes change and you may cook differently, so more recipes may be useful. Which just means you should never get rid of a cookbook, maybe that is why I have so many, someday I should count them.

Noticed my crocuses were blooming this week! I was going to take a picture but they close up pretty early, and I missed them. The tulips and iris and several other perennials are also up, I am pretty sure we will get snow on them at some point but hopefully it won’t freeze too hard. It looked like snow/rain in the foothills this afternoon but apparently it is just dust blowing in the wind. There was a major fire going out on the Eastern plains on Sunday evening, I have farmer friends out there that I am thinking about. It is very dry and windy, we could use some moisture (even snow!) for the crops and just simply to cut down on the fire danger.

Leo says we don’t have to worry about HIM jumping up on the entertainment center. He and his fishy are happy to stay on the ground.