This will be a blog about my life: cats, knitting, quilting, crocheting, cooking, and other random crafting. I almost named it “Angel of Destruction” after a friend called me that on Facebook after I nearly burned down my kitchen, and also had my Crockpot AND my food processor die within a few weeks of each other. Well, the Crockpot’s handle disintegrated on its own. The food processor, I may have had something to do with. But that was because of a design flaw, because it stuck when I tried to open it and consequently broke off the little thingy that tells it it that it is safe to operate.

Another hobby I enjoy is thrifting and antiquing. An update on recent antiquing: We returned to my husband’s hometown near Sioux Falls, SD, for Thanksgiving, and instead of going to the mall and Target with my sisters-in-law, of course I went to yarn stores and antique stores. After the two “nice” antique stores, I told the owner at the the 2nd store that her store was very nice but that I wanted to go to a junky antique store, one that had piles, one that would have glow in the dark Virgin Marys that I collect (the lady at the first, VERY nice antique store burst out into hysterical laughter when I told her what I was looking for.) She recommended I drive out to Hartford and go to Aunt-T’s-Ques Wayside Shoppe. And let me tell you, it was a junkatorium. Well, he had nice stuff, but also a lot of random stuff, and very closely packed together. Just my kind of place. He had a lineup of about 10 meat grinders all attached to one shelf that were very impressive. Only one glow in the dark Virgin Mary, however, but they are hard to find, that is why I enjoy collecting them. He was pretty sure he had another one but couldn’t find it. I gave him my card with instructions to email me if he found it, we will see if he can hold onto the card.

At the first antique store in Sioux Falls, Belsnickel, I got some vintage jewelry for my niece’s Christmas present (she likes to play dress up with jewelry) – 3 necklaces and 3 pairs of clip on earrings, and than at the junkatorium, I found a small jewelry box for them. I showed great willpower and DID not purchase the truly frightening Poodle/Bulldog TV lamp that I immediately was attracted to, or the lovely shell bouquet (thinking of re-doing the guest bathroom in “shell” decorations, haven’t shared that idea with the husband yet….wait, I just did, I showed him a nice shell lamp on Ebay and he says “absolutely not.”). The lamp was similar to this one, only I do believe it was a bulldog rather than a pug. (Thanks to http://www.tvlamps.net/index.html for the picture)

If you think this is scary you should see it with the eyes glowing.

I have no pictures of the jewelry and box because I boxed them up and left them with my mother in law. (She likes to wrap, is going to wrap them for me, that way we won’t have to mail them back and forth…)

This is the very fine wooden purse I got at Lost Marbles Antiques in Sioux Falls, which is a very nice shop. I also got a nice gold and black rhinestone necklace there (next pic.) 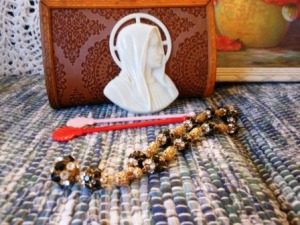 And there is the glow in the dark Virgin Mary (looks like she used to be part of a larger plaque), swizzle sticks (I had something I needed to swizzle the other day) and necklace. Close up of the Virgin Mary:

After seeing a large glow in the dark Virgin of Guadalupe at a cool little tchotchke shop in Austin (which a co-worker TALKED ME OUT OF BUYING, I still can’t believe it), I decided I should collect them. I have one Lady of Guadalupe (smaller, about 9 inches, the big one was about 14 inches) and one very modern looking one. And I am on the hunt for more. My husband thinks this is kind of weird (he is the one that is Catholic) but he has learned to not be surprised by any of my hobbies.

And the very cool picture I got to hang on the wall. I am on a poppies kick lately, probably because there is a lot of poppy fabric out there right now. When I saw this print from the 40s, (and still bright as the day it was made), I decided if I didn’t buy it I would regret it and end up driving back out the Hartford to get it anyway. Plus, this is the exact color of the poppies that grew in front of my Grandma’s house as I was growing up. Buying this picture caused us to have to pay to check another piece of luggage.

We didn’t HAVE another piece of luggage along, so we created one.

Nice, huh? We used up all of DH’s parents’ duct tape. And a couple of other kinds of tape. But it made it through the flight just fine. AND it was searched by the TSA, even after the guy asked me what was in it, and I said “A poppy picture, a glow in the dark Virgin Mary, swizzle sticks, a wooden purse, a necklace, popcorn (a story for another day) and a pair of shoes.” You would think that would be enough of an explanation. They did tape it back together quite satisfactorily.