As I write this Friday morning, it already seems so loonnng ago – Vegas does that to you.

Retired pretty early (well, comparatively, midnight, I suppose) because Thursday’s morning rehearsal started at 8:00 rather than 9 or 9:30, and Miss SD was first out of the starting gate in talent. So I was up before my alarm at 6:30 and went to the Miracle Mile Shops adjacent to Planet Hollywood, this time I went for the 3.99 breakfast special at La Salsa Cantina – 2 eggs, potatoes, bacon, and tortillas. This was also good! And the required Diet Coke (and water, trying to stay hydrated, Vegas is worse than Denver for being dry.)

I got to talent rehearsal in plenty of time before it started. Miss SD did change her talent from Miss SD – from using “Defying Gravity” from Wicked as her song to “Hot Honey Rag” from Chicago. And, this type of stage does not allow her to do as much of what I would call “flying” tricks – but it is still a marvelously entertaining talent, especially if you can see her face, which the judges can but 90% of the audience really can’t. I can’t wait to see her do this one on the Miss SD stage, although I am hoping she does both of them.

This group had, I kid you not, out of 17 contestants, FIVE who were doing a lyrical or jazz dance and were wearing white. Wow. As my top talents, I had picked SD of course, VT who sang Habernero very nicely, and WY with an original piano composition. I really liked ND playing the piano and singing, but also knew that it was kind of non-typical Miss America talent, so was delighted when she won! Way to represent the Dakotas!

I think this was the strongest group over all (Alpha) in swimsuit – the first round of rehearsal I circled five as ones to watch: WA, CO, OK, FL and TN. And then the second time through I couldn’t really narrow it down, but I thought probably FL or TN. And was delighted that one of my first picks, WA, was the winner.

My favorite evening gowns were CA in a seafoam green velvet strapless with a beaded/jeweled band at the waist, and OK in a grey/silver satin.

It was starting to cool off outside, and I could sense that, so what I really wanted for lunch was a big bowl of soup, so I went to P.F. Chang, I love their chicken noodle soup, and it is reasonably priced. Plus you can spice it up with the various condiments they give you like red pepper sauce and hot mustard. 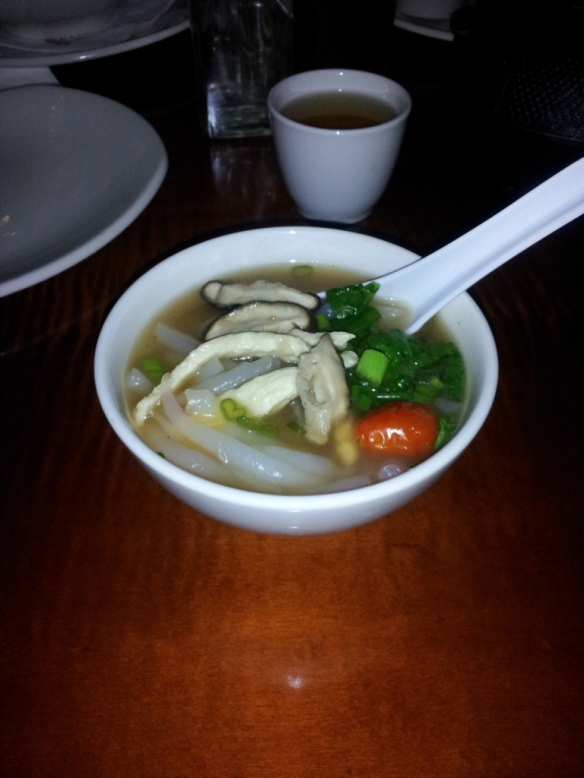 And then I went up to the room to write the blog – these blogs on travel really take a long time, trying get in all the fun details, but I know I will enjoy reading it later and remembering, and I do enjoy sharing it with my friends who are not able to be here for the pageant!

Tried to nap, again, mostly unsuccessfully. So I enjoyed the soaking tub and read my book. Decided to just be simple and have a Pink’s hot dog for dinner. I go down there, and place my order, for a Planet Hollywood Dog: polish sausage, grilled onions, grilled mushroom, bacon (3 strips) & nacho cheese, and french fries. The lady takes my money, and says, #13 at the end of the counter. OK, I go down there. The lady at that end announces #13 right away, and I think, hmm, that was quick, but OK. I get back up to my room and I have a Polish Pastrami Swiss Cheese Dog: polish sausage, pastrami, swiss cheese & mustard and cheesy fries. Well, I wasn’t very happy, but I bet the person who got mushrooms and onions was even more annoyed. Maybe they noticed the confusion before they left the shop. I would have eaten it there, but they only had outdoor seating, and it was getting colder, so I wasn’t about to go back all the way down there. So no picture of that, because I was annoyed.

Worked more on the blog, editing pictures, and etc. I was having a craving for creme brulee – the ever-constant dessert on most Vegas buffets, but I have only been to one buffet this week, and it didn’t have creme brulee. Well, I thought, there is a little coffee place in the Miracle Mile shops, and I had seen that they had “Homemade” creme brulee. Hey, I am in Vegas, let’s go get a creme brulee. The first warning sign was when the lady didn’t know what I was talking about, I had to go show her in the case. I am pretty sure she was just going to hand it to me, “as is” – just the custard, but the other lady working grabbed it and took it to the back, to do the sugar caramelizing on the top. Then she overcharged me for it, as well as for the hot chocolate (which was really quite good) – I pointed that out and that required 2 different people to fix. The creme brulee came out, and it looked pretty good, but oy, not a good creme brulee. Lots of un-caramelized sugar on top, and the custard was not a good texture, or taste. So I was batting .5 on food for the day. 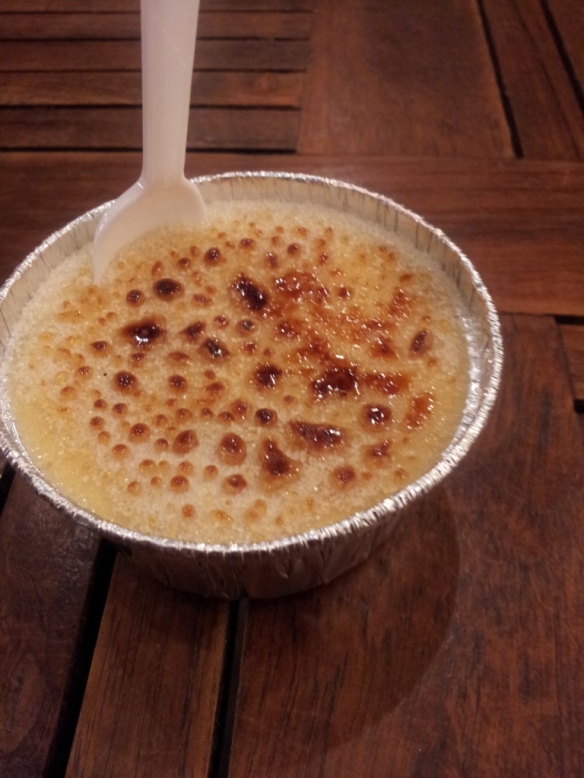 Time to go to the room and get ready for the evening. I was wearing my new red dress from Torrid. Called Ken and explained to him where to find my flats, which I want for Saturday night since my feet are killing me.

I was meeting my friend Erin and her BF for drinks again before the pageant – the “PBR Rock Bar” has some $5 drink specials, so we thought we would try that, rather than the $12 or more drinks which are quite common here. Erin had texted me that she forgot the tickets and had to go back for them, so they would be a little late. Well, when they arrived, she was all aflutter – when she came out of the room with the tickets, TJ was on his knee in the hallway with an engagement ring!

Since she had apparently had an inkling that this was going to happen in Vegas, he decided to go with a surprise location instead of going to a fancy dinner or the top of the Eiffel Tower – and I have to say it worked perfectly – she was quite shocked! So that was very fun to be one of the first to share that news!

Enjoyed the show again – Miss SD had hurt her foot trying a more difficult move on the stage floor during her talent run-through in the morning, so substituted back to the previous move, which was also pretty spectacular. And you couldn’t tell that she had hurt herself at all. I also remembered the binoculars this time, which was helpful, it was so much fun to see her facial expressions during talent. I was sitting by a former Miss SD this time, who is one of the pageant fashionistas, so that was a fun commentary.

After the pageant, up to the ballroom for the visitation – again, the SD group is getting bigger each night! We took up a huge section of the wall for our group picture. What a hoot. And four former Miss SDs, plus our current Miss SD, so that is really pretty cool.
This is how Vegas/pageant messes with your circadian rhythms. You get all wound up seeing the pageant, and then your contestant at visitation, and then you need to do something to wind down, so you end up going out and staying up even later. So I went over to the Rock Bar again for another $5 frozen drink, and then hooked up with Erin and TJ and other pageant friends at another lounge in the hotel. This is Vegas – apparently you can carry your alcohol from one place to another quite freely.

We hung out for a while, and people watched, which is VASTLY entertaining in Vegas. I decided to make it not TOO late of a night and headed up for bed a little before 1:00, stopping at Earl of Sandwich (why didn’t we know this place was open 24 hours the FIRST night – strategy note, find out the places that are open late around the venue) to get a sandwich. I knew I had been up too late when I couldn’t find the buzzer they gave me but then discovered I had tucked it in my armpit. TIME FOR BED. But I enjoyed my sandwich first, they do good sandwiches, and then sacked out.