I had too much time to get ready for this trip. The flight didn’t leave until 1:00 p.m. or so, so I had too much time to pack, which means I didn’t really pay sufficient attention to my packing list and/or what I was actually packing. So when I got to the airport, I realized I didn’t have any books along to read. AAAAAAAA! Must have books. Well, that is easily remedied, they sell books at the airport. OK. Problem solved. I ended up kind of being disappointed in the book I got, but it served to keep me entertained.

Had lunch at the airport at Tamales by La Casita’s, which is relatively new. It is a nice change from the usual spots. I had the tortilla soup, big surprise that I had soup, huh? I wasn’t that hungry after the large breakfast (see last Friday’s entry about LePeep.)

Also, when the bill shows up on your work credit card, it is posted as being in Greenwood Village, which makes the office manager wonder what you are doing there and why you are expensing this meal.

As I settled in on the plane, I thought, “OK, I am going to read my book, and then after the plane levels out I will get out my knitting.” And then I reach into my bag and NO KNITTING. My three different projects are sitting at home on the couch with my BOOKS. Oh, the pain, oh the mental anguish. So I had to just read my new book. And I knew I would need to buy another one before I flew home, because I read really fast and one book wasn’t going to last the entire trip.

We stayed at the J.W. Marriott near the Galleria Mall in Houston. I didn’t even get to shop at the mall, we just walked through it to get to a restaurant once or twice.

It was a nice hotel. I asked for a quiet room, and was put on the top floor, which was actually NOT quiet, because I think the elevator mechanism was right about me. I heard the elevator motors ALL NIGHT LONG. So avoid the top floor if you ever stay there.

The room was perfectly nice, good chocolates on the pillow (they had some herb or seasoning in them which I now cannot remember.) 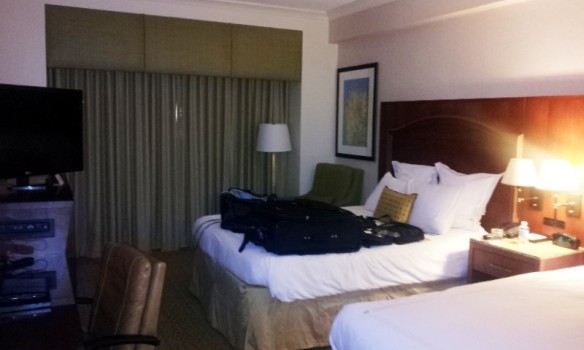 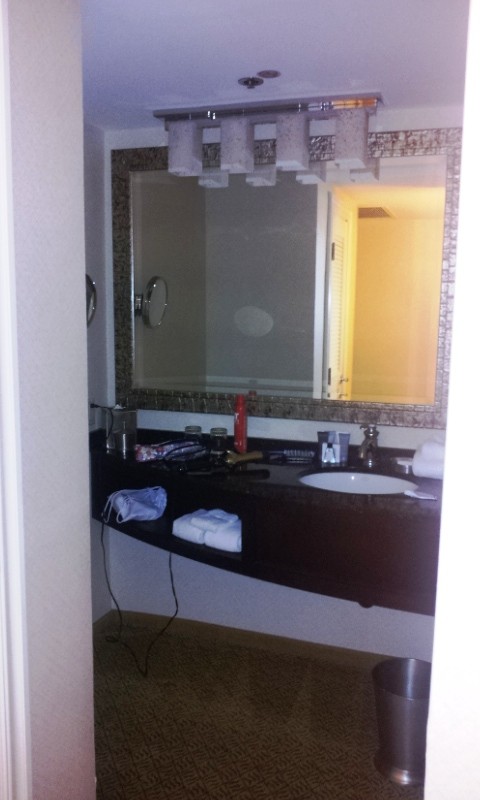 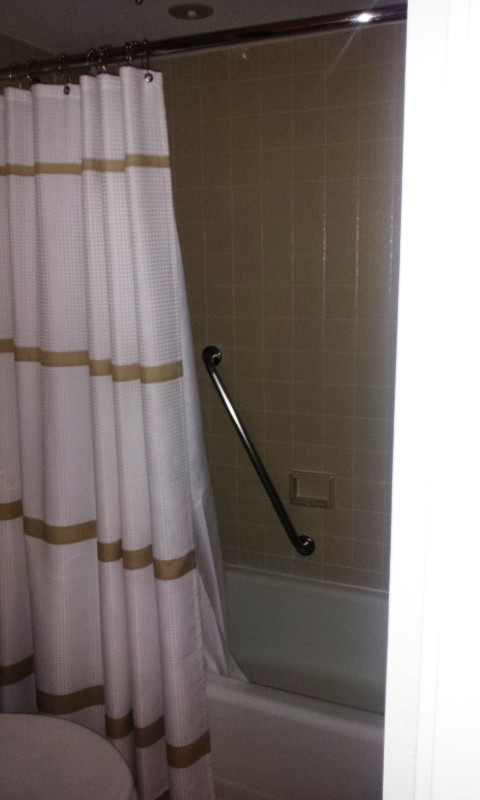 Do we really need phones in the bathroom? Then again, it is probably more expensive to take the phones down and patch the wall tile than it is to leave the phones there. I did not check to see if the phone worked.

I turned my board loose on their own that night and went out to eat with my best friend from high school, Brian, who works in Houston. Until this summer at our class reunion, I had not seen him for 25 years. So it was extra fun to get to see him again this year. We ate at Pappasito’s Cantina. The parking lot was jam-packed so I was a little concerned about how long we would have to wait, but we were seated immediately. This is apparently a great place for getting together, having your birthday, etc. It was very busy for a Wednesday night.

I had the tortilla soup. Big surprise. It had zucchini in it, which was new and unusual.

And I had the ceviche. I know the soup and the ceviche would fill me up sufficiently, and it did. I am pretty sure I also had some large alcoholic beverage. 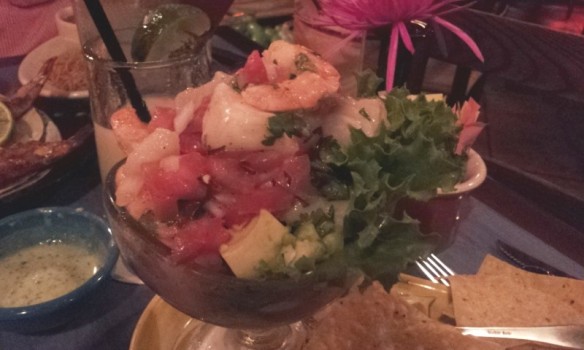 They also had EXCELLENT chips and dip, including both salsa and a creamy dip (tomatillo maybe?) that you can see in the background here. Apparently there is a Pappasito’s Cantina in Denver, (well, Greenwood Village), we are going to have to eat there sometime when we are down south.

The next day we had a hotel-catered lunch which was really very good. The mixed greens salad had beets, which I love. The pork loin was well cooked and tender. I did not take any pictures.

That evening we went out to eat at Sullivan’s Steakhouse with another state board. Again, I knew if I enjoyed the appetizers that were ordered for the group (Calamari, Cheesesteak egg rolls, and a couple of other things that they made special for us that I don’t have pictures or recollection of) and wine, I would never be able to finish an entire entree. So I had the raw oysters, mmmmm, I try to take advantage of being closer to the ocean. 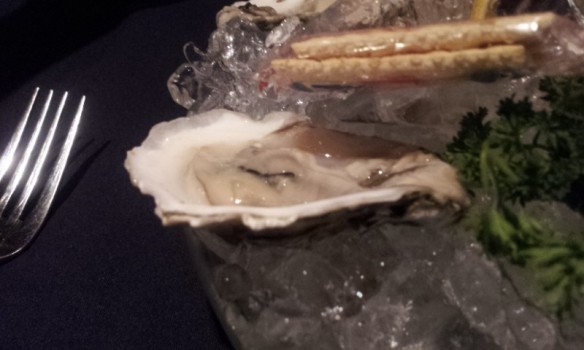 They were good, but ever since I had raw cherrystone clams in Boston, oysters just haven’t been the same.

The french onion soup was fine, I recall thinking it could have been warmer. We had a nice bottle of wine, too, no idea what kind it was, tho.

The next day three of us went to Kona Grill and had sushi rolls. It was excellent, fun to have three people so we could order a variety of rolls. No pictures, though, sorry.

That evening we ate at the Oceanaire Seafood Room. I really wanted stone crab claws, but they were just a little spendy. You could only get them by the pound, not any less than that. So I had the “Fin and Shell” seafood stew. This was very good – mussels, crab legs, shrimp, fish, and more. They give you a bib, which was a very good idea in my case. It was quite messy, cracking the crab legs. Sorry for the terrible picture, it was dark in there. 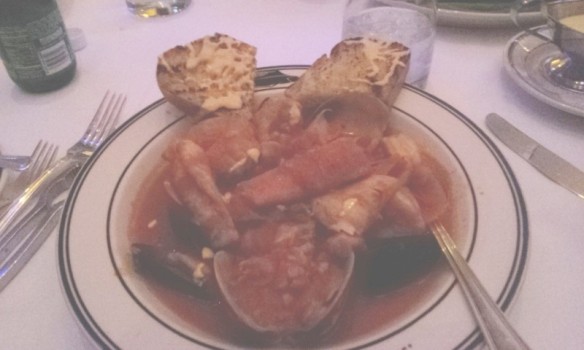 Everyone was very happy with their meals there. One of the sides was got was the best macaroni and cheese I have ever had: MAC & CHEESE Applewood Smoked Bacon, Smoked Gouda & Jalapeno. It was amazing. Not sure I would be able to duplicate it, and not sure Ken would eat the Jalapeno anyway. Yum!

For our last meal (lunch) in Houston, we walked down the street to the Grand Lux Cafe. This restaurant is owned by the same people who own Cheesecake Factory. I had soup and salad – the soup was tomato and white bean, and the salad was the Roasted Beet and Goat Cheese salad. I love beets, and I love them best when someone else prepares them for me. Mmmmm. They were both very good. 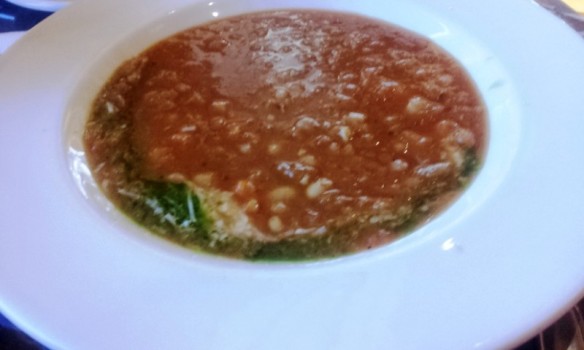 We got to go home on Saturday night, so that was kind of nice! Half of the weekend at home!

2 thoughts on “Visit to Houston”