I haven’t posted about the great living room “remodel” yet. Ken has been itching for a flat screen TV for years, and I have been putting him off, because the 19-year old TV we bought before we got married still worked just fine. Granted, it weighed a ton and only got about 60 channels, so we had to run the cable through a VCR so we could get the rest of the channels, but hey, it worked. In my family we don’t believe in getting rid of things if they still work. Or even if they don’t work, you might want to save that for parts for a while. This policy has worked out pretty well for my Dad and his machinery.

I think when Mom and I cleaned out the garage attic (how many years ago now?) we tossed about 6 ancient vacuum cleaners. Vacuum cleaners are not a “keeper.”

Anyway, Ken was director of photography for a local film and got paid for it, so we discussed that maybe a good use for that money would be a new couch for the downstairs living room and a flatscreen TV. He started watching the newspaper for sales.

We were out for breakfast one Saturday morning in September, after we had dropped his car off to be worked on, and he was lamenting that there were no sale ads in the Saturday paper, so I handed him the ad that popped up right in front of me. And there was a TV, on sale, that was just what he wanted. He did some research on the internet to make sure it was an acceptable brand and model and went off with my car to buy it. Well, even with my hatchback, it couldn’t fit in the back of Mimi the Matrix, because it is a plasma TV and can’t be laid flat for transportation, it has to be kept upright. So we got set to have that delivered the next day.

I said that as long as we were doing that, we might as well go ahead and get the new couch then. We only had a love seat in the downstairs living room, as you have to go down stairs to get down there, and a big couch did not fit around the corner of the stairs into the hallway.  So we were limited on our options there. But the loveseat and chair really only gave us space for three people to sit. Then IKEA arrived and saved the day! All of their furniture comes in pieces, so I knew that was idea for our situation. We could get a larger sectional couch, and still get it down the stairs.
So off we went to IKEA and purchased the couch, by buying it on a Saturday, you get to specify that it is delivered on a Sunday, and that means you can choose your delivery time by the hour, rather than just knowing it will get there between 8 and 5 o’clock.
The couch arrived on schedule, the TV arrived on schedule, Ken called our handy teenage neighbor and asked him to help haul the old couch outside, and we were ready to go!

We also had a sewer issue that Sunday morning and THAT repair person did not arrive on time, but that is another story.

The old, huge entertainment center has been moved to a different wall, and a space cleared for the new couch. MaryAnne has to be in the middle of everything, as usual.

Just a few homeless books, waiting to be relocated. 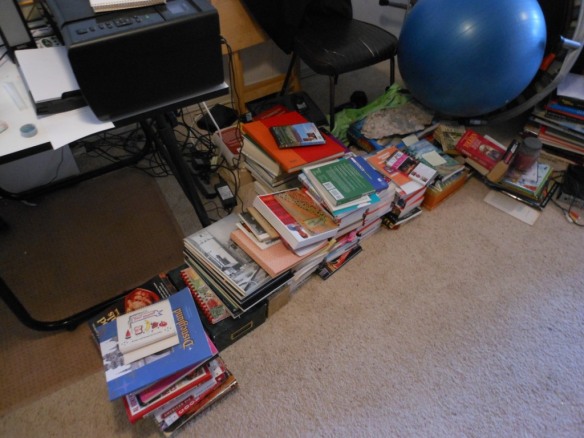 The old loveseat was put outside with a “free” sign on it and was soon gone. 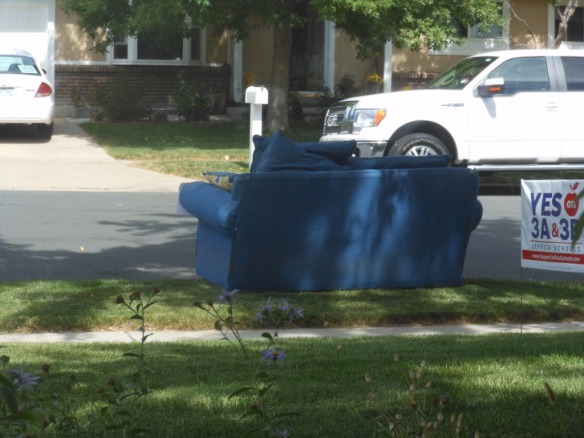 The couch arrived in three rather large boxes. It doesn’t help that I was working on some sewing project that required the back up sewing machine be set up in the upstairs living room at the same time.

Ken was downstairs assembling the couch while I was upstairs stuffing the couch cushions into the slip covers. Not as easy as you might think. There were several different variations, and you had to match them up by shape. This is not something I am very good at.

We were trying to get this all put together so we could go meet our friends from Hot Springs, we often go out for lunch together before they go to the Broncos game. Well, we could have left the couch and TV as they were, except that we were waiting for the drain-rooter man. So we kept on working.

By the time the Broncos game was on that night, it was ready for action. Both of the cats had discovered they could hide UNDER this couch, which made it quite popular. Leo, especially, is always looking for more hiding places. 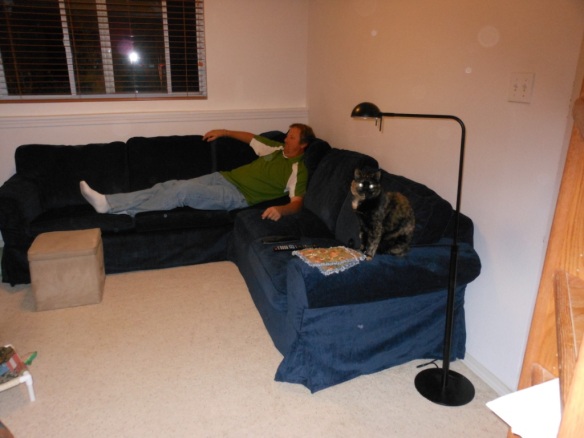 MaryAnne and her glowing eyes.

More or less cleaned up:

Yeah, I probably need to get something put up on those walls…..

So now we need to get rid of the old entertainment center, which is huge. Ken thinks the smaller bookcases are fine. I think we should get rid of the whole shooting match and get more modern shelves, again, perhaps IKEA. I may take the old taller units for storage space in my studio. But those decisions are many months and many saved dollars down the road….

4 thoughts on “New TV and Couch! Out with the Old!”