Writing this entry a week and a day later is not a good idea (and then it took me a few more days to get it posted….) Everything was starting to be blurry by this point anyway. Fair, fair, fair, sore feet, fair….

This was the day the kids were going to go on the midway rides, and I (crazy) was going to go with them. My brother was going to buy me the wristband. Well, somehow, he miscounted, and I didn’t get a wristband. Trust me, I was REAL torn up about this. And the kids found out their friend from the neighborhood was going, so they would have her to ride with. They are up there somewhere in this picture:

We all slept in for a bit, and S. had a Dr. appointment that was nearly forgotten, and after she got back from that, Wade had a conference call, so it was about 10:45 before we left the house, and maybe 11:30 by the time we made it to the fair. The kids commenced to riding on the rides, Wade grabbed some mini-cinnamon rolls again, and I headed for the Lamb Producers booth on the south side of the fairgrounds to get a lamb sandwich.

It was OK – could have used more barbecue sauce, but the sauce pump was being slow. Next time I will try the lamb walking taco or lamb kabob, this was just a bit dry.

As I walked back across the fairgrounds, there was no line at one of the crazy fried foods booth. By now I realized my limitations on how much fried stuff I could eat in one day. So I tried to pick something unique that I hadn’t had before and wouldn’t ordinarily encounter. So I chose the deep-fried pineapple.  Wade declined to have a bite. This was really pretty tasty. 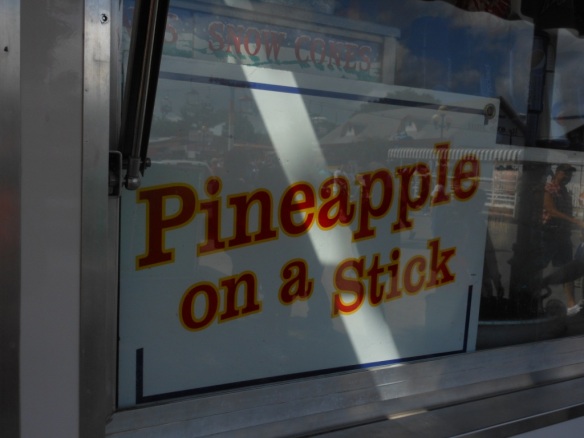 We watched the kids go on rides for a while, and went to get some lunch before their friend got there. We started with cheese curds, which everyone shared. I think we went back up the hill to get D. macaroni and cheese again, and so I could go through the Cultural Arts building and get the prints I wanted. 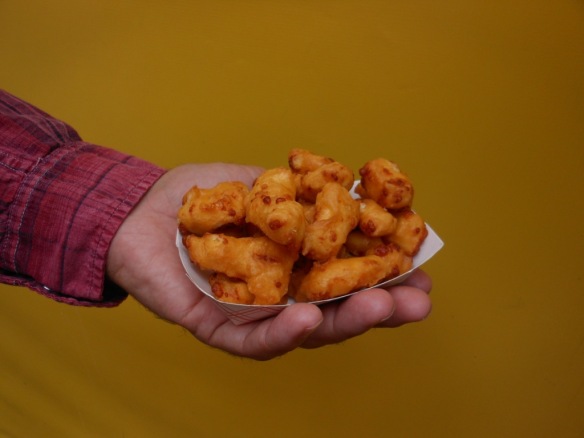 At some point when the kids were riding rides, I got a sandwich at Crescenti – this is a fried bread sandwich with mozzarella cheese, ham, cappicola, hard salami. I think they then warm it up a bit to get the cheese melty. This was very good too, I would have this again. The fried bread is excellent. 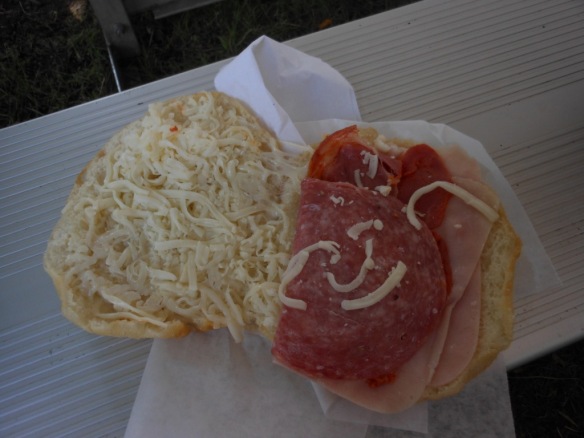 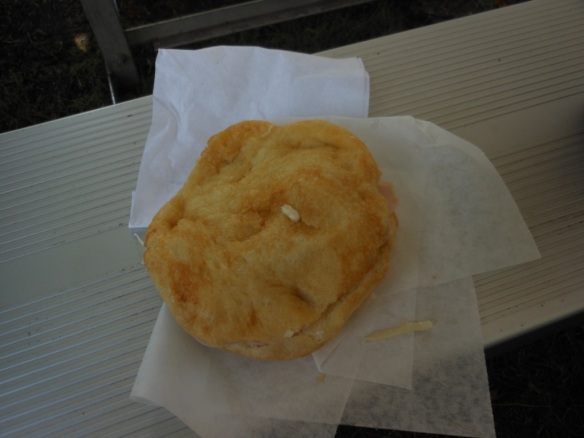 We knew we had to wrap it up pretty early because I had to be dropped at the airport, and they had to get home for the kids’ school open houses that night.

We did all end up in the Varied Industries building together one time, because the kids wanted to get temporary tattoos, and Wade wanted to get the famous “Bucket of Chocolate Chip Cookies.” The cookies were not bad – I didn’t get any cold milk with them, and that really would have been the best way to have time. They are best warm, right at the fair. They lose some of their appeal at home at night.

All in all, it was a great trip. I think the ideal way to go would be to have a break day in between each of the days at the fair, because, man, your feet start to hurt. Things I wanted to do but didn’t get to: Iowa wine tent, craft beer tent, sit and watch more of the foods judging, watch the piano, accordion and harmonica contest, watch more of the Bill Riley Talent contest (looking at the results, one of the pairs we saw tap dance from the Sprouts division was selected one of the top three Sprouts acts). I didn’t eat nearly everything I hoped to eat, which is probably just for the best. I would love to get there to get a seat to watch the sheep shearing, and would love to watch some of the more crazy contests like husband calling and rubber chicken tossing.

There were many more shows and activities on the free stages, and a hymn sing, and demonstrations, that I would love to see. There is a “Old Mill Stream” ride that I didn’t go on, as well as a 2nd aerial tramway. So much to do, so little time. So many opportunities to people-watch.

I forgot to mention that S. Watched the crowning of the Iowa State Fair Queen instead of going to the concert on Saturday night, I wouldn’t have minded watching that either. She got her picture taken with both the 2011 and 2012 queens.