Sunday morning it appeared that it would only be my brother and I for awhile, everyone else was still asleep. My sister-in-law is generally not that enthusiastic about the fair, but she was willing to come for another day since I was there, and the two older girls were going to be working at Old McDonald’s farm as volunteers to help the participants, so she would bring the kids later and we would get to spend some time with D. while the girls were working.

We headed out to the fair and got there about 9:00 – I started out the daily food fest with hot bologna on a stick from the Pella booth. (Side note – I can’t get ring bologna in Colorado. I can get smoked sausage and Polska Kielbasa in Colorado, but I can’t get the ring bologna that I grew up with in South Dakota.) (Not at grocery stores, at least – I guess I should start checking at butcher shops.)

We decided to head for the Varied Industries building (commercial exhibits), so we could go through it without the kids and their primary interest in getting temporary tattoos along. Of course, I had Wade take my picture with the cutouts of the Obamas at the Democrat booth. He declined his opportunity.

Speaking of ring bologna, there was a booth of goods from the Amish, including ring bologna, which I couldn’t purchase to take home because it was refrigerated. But they also had a bunch of dry soup mixes, which I always enjoy trying, as well a cookies, candy, breads, handmade items, etc. They even had small individual serving soup mixes, handy for lunch or breakfast. That was probably my favorite booth.

Then I stopped by the Tupperware booth, and found they had two different new flip-top soup mugs, which would be ideal for making the soup mixes I found at the Amish booth. I started making a list of things I was going to come back and buy, and started wondering how I was going to fit them in my carryon suitcase.

I also discovered that the quilting, crochet, knitting, etc., was upstairs in this building – I popped up there to see if it was something to look at quickly, but there were a lot of beautiful things to look at, so I decided to come back later when I was on my own. There were also several rooms downstairs featuring Iowa foods (with samples), I had some excellent hot salsa.

We got through the commercial building and headed up to the Double Bacon Corn dog booth, which was across the fairgrounds and up a hill, so at least you got some exercise going up there to get your corn dog. Wade and I each had one – they weren’t too bad for the first two bites, but then they really got to be a bit much, a little greasy at the end. And once again, I was feeling like I had quite enough fried food for a while. Worth having once but I don’t think I need to have one again.

We were close to the cultural building where they had the photography, sculpture, woodworking, etc., so we went in there and looked at the photos and paintings for a while. They also had artists with items for sale, and I found some prints I liked and put on my list to come back and get later. By this time, we had heard from Laurie that she and the kids were there, so they came up the hill to find us. T. and D. needed some breakfast – T. had eggs, potatoes, and Texas toast, (and the potatoes had sausage and green peppers in them so Laurie and I ate most of them) and D. had macaroni and cheese – which was also good. I decided to try the bacon-wrapped eggs, which was kind of like a muffin with a whole egg in the middle of it and bacon on the outside – it was not bad. Oh, and cheese on top. And possibly there were potatoes in there. Breakfast in a muffin! Another new thing for the fair this year.

Once the kids were fed, we hopped on the State Fair trolley to ride down the hill, and Laurie headed off for Old McDonald’s farm with S. and T., and Wade and I stayed on the trolley with D. We walked through more commercial exhibits under the grandstand, and then Wade and D. headed for the Department of Natural Resources building to look at the big fish, and I headed for the Varied Industries building to look at the quilting, crocheting, etc. Lots of very nice things. The area that seems to be least popular is hand embroidery. Some really outstanding quilts and beautiful lace knitting. Next time, I should start in this building while my feet are still fresh.

Before I headed over there, I stopped and got a Dutch Letter, which seems to be an Iowa specialty. These were also at the Pella booth. These are made with flaky pastry and almond paste – it was delicious. Counteracted all the somewhat fatty savory things I had been eating.  Now I want to bake some almondy things. Hmmm, I bet the Iowa State Fair Cookbook has some of them in it.

Wade messaged me at one point and told me there was one more section of commercial exhibits under the grandstand that I missed, including more dry soup mixes, so I headed over there, and sampled more soup mixes. Put them on my list to buy later. There was a booth here on my list of food items to try – Gourmet S’Mores, but I was too full of Dutch Letter and bacony things.

I decided to start buying a few things that weren’t too heavy, so I started at the State Fair booth and got the Iowa State Fair cookbook (Ok, maybe not so light) and a new Iowa State Fair T-shirt with a corn dog on it, of course. I have one from several years ago that Wade got me that also has a corn dog, a collection of shirts with corn dogs on them is a good thing, of course.

I messaged Wade to see what they were up to, and the girls were done volunteering early because they had an excess number of volunteers, so they were going to sit and watch the Bengal tiger show. I decided to venture back to the Agriculture building.

I also made it back over to the Agriculture building because I thought there was another booth there with dry soup mixes (yes, I am quite possibly obsessed). Sampled his soups and bought 4 of them – he had some deal going, 4 for $24 or something like that. I also bought 2 lip balms at the honey producers booth, and promptly left them there, so I am just considering that a donation.

I also visited the giant pumpkins.

We had talked about leaving right after the girls got done at Old McDonald’s farm (4:00) but things never work out as planned, and L. had to leave and interview a job candidate, and she and T. wanted to walk through the horse barns together, so we ended up staying a little later than planned.

These are a few of the many painted concrete ice cream cones which were displayed around the fairgrounds, decorated by different groups or artists. This one was the cutest one, I think. We also liked the one with the vegetables on top. We hadn’t had a chance to look at the giant pumpkins yet, so we did that. They were smaller than usual this year, because of the drought. 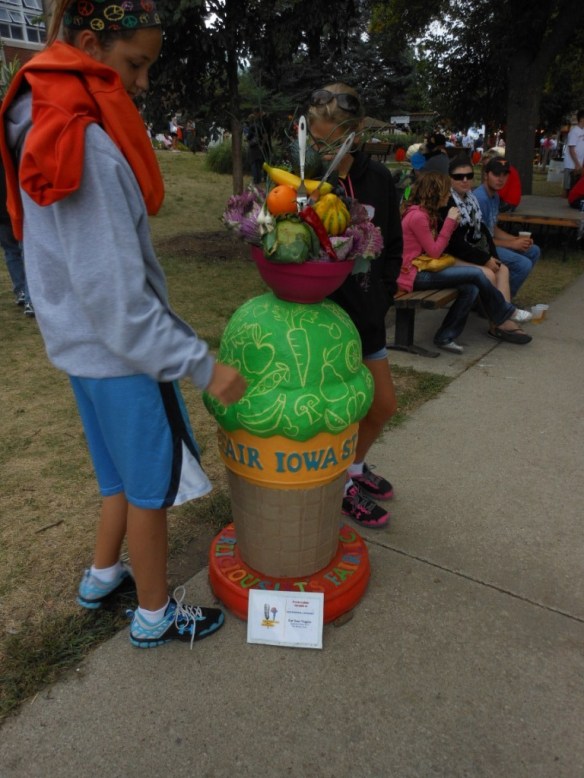 Side conversation: I think we were on the trolley, and Laurie saw some kids getting their picture taken with one of the ice cream cones, and one of the little girls was licking it. Laurie, who is a microbiologist, about had kittens. “Ewwwww, I’ve seen what people do to those things!” “Yeah,” said a guy across from us, “Especially the ones near the beer tent!”

We were getting ready to head out, and the kids were given the option to do one more thing before T. would go with her Mom and the rest of us would head home. They wanted to go in the butterfly tent. This is an enclosed “butterfly adventure” but really it is a license to manhandle butterflies as much as you could want. The smart and/or lucky butterflies were up high on the tent where no kids could reach them, plus it was starting to really cool off, so they weren’t really flying around much. But there were still enough around for the kids to look at, pick up, fasten to their shirts, feed Gatorade on a q-tip, etc. And there were chairs, so I was in favor of that. I went in with the kids and Wade stayed outside and waited for Laurie to get there. When she arrived, we handed T. off to her and headed home. It rained on us driving home and we wondered if they were getting rain at the fairgrounds.

When we got home, S. showed me their garden, which had apparently gone a bit crazy while they were gone on vacation the previous two weeks. Their sunflowers were about 12 feet tall. Their gourd vine was climbing the spruce tree quite enthusiastically. Dawson had wanted me to show me his game (Skylanders?) on the Wii, so he played that for a while as I “watched” and looked at my Iowa State Fair cookbook.

Laurie and T. got stuck in the rain at the fairgrounds, and finally bolted through it for the car. When they got home we went to the NYC Pizza Café http://www.nycpizzacafe.com/ for pizza, excellent New York style pizza. And then we were all about ready to crash when we got home.

Favorite picture of the day: There are several of these wooden, carved statues around the fairgrounds. It would be fun to mimic them all.

I have a pair of those glasses…..