This was written by my niece Sydney because she is tired of waiting for a blog entry.  (She is even more annoyed now that I have had this for more than a week and haven’t posted it yet!) (Notes in ital. are by Glenderella)

The Drive and Evening of South Dakota

We started off the day by waking up and finishing packing because I had to stay up last night making a tie for Ken for a commercial. I had to make it because another person is going to slash it off with a sword. Which my niece, Sydney thought was extremely cool and entertaining.

(This is Ken doing the equivalent of saying he needs a turkey costume for school tomorrow. He needs a tie for a commercial he is making that will look as if someone has cut it in half with a sword. He, of course, assumes this will be a piece of cake and “won’t take long…” Uh huh. So wrapped up the day doing that. I ended up using double stick tape, because the tie trick isn’t going to have to be done over and over for many nights, just a couple of times for the commercial shoot. I did have to reinforce the tie and make sure the inner lining didn’t show where it had been cut.)

When we finished packing and I called my Mom to ask her if there was anything I needed to bring, as I am very forgetful. She just said the socks I knitted for her and cross-stitching stuff for my niece, Sydney. Then we got on the road, as myself and Ken took turns driving. We stopped for lunch at the truck stop in Lusk. I had a hot beef sandwich. Ken had a bacon cheeseburger. We liked it, very good. (Ken liked his, mine was not very good. There was no taste to the gravy, it was just brown. It tasted like brown. That is all. Next time I will remember to have the soup and a piece of pie.)
Pictures of food: 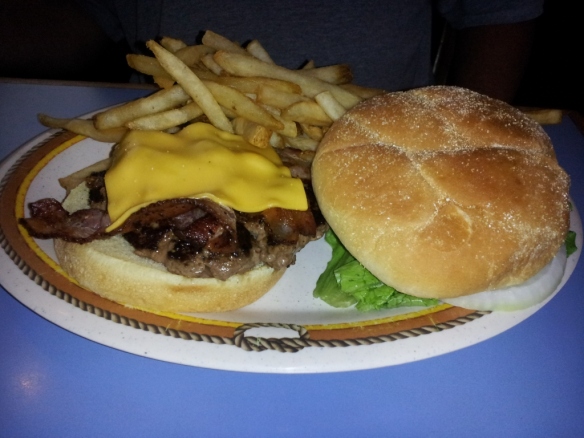 We got back on the road and kept driving on the way we listened to the iPod and the person in the passenger seat was entertained by the flower that dances by solar power. (I have a solar powered flower on my dashboard that bobs. What of it?) (When Ken was driving, I was crocheting on my #2 Camp Loopy project.)
We were driving for a while and then we stop at a truck stop to get out of the car. Ken found some jackalope nuts that we have to get on the way home for his co-workers that asked him to bring home an interesting food from South Dakota.

(We actually saw the jackalope nuts at the truck stop where we ate lunch. I didn’t get a look at them but it sounds like they might be chocolate covered corn nuts. We were going to stop and buy some on the way home for Ken’s co-workers but we forgot.)

Once we got back on the road and driving we were almost to Hot Springs I guess we drove through a fire that is quickly spreading and is still not contained. (We didn’t drive THROUGH the fire, we could see it as we were driving, it must have been pretty early in the fire activity because the guy at the gas station didn’t even know there was a fire. This fire is called the Myrtle fire and is still burning.)

Once we got on the gravel road which means we are almost to my parents’ house well then we got stuck behind a cattle truck going maximum 25 mph. (Only for a couple of miles, though.)

When we got to my parents house the first thing I heard when I walked in the door was my niece, Sydney yelling “hooray!!! Glenda’s here!!!”. Then my mom saying ” Sydney not in my ear” as I walked through the door seeing her ironing, which she says wrong, in the 102 degree weather.(Sydney pronounces iron as eye-ron, apparently there was not enough ironing going on at her house at a formative age.)

Then Ken and I got hugs by all of them. Then we sat down and were talking as my two nieces Sydney and Taylor and my nephew Dawson were bringing in kittens showing us. Ken and I didn’t think the kittens enjoyed being SCOOPED up and tossed over there back to be carried in and out of the house. We had lots more fun and talking when we watched the news, Wheel of Fortune and Jeopardy.

We had dinner which was leftovers and talked about Ken’s movie he is filming about deaf kids learning to play basketball and at that point my niece, Taylor said they should include a cracken( check my spelling) (kraken) (kraken was ONE of the things we looked up in the encyclopedia, this particular encyclopedia did not include kraken as an entry.) and Ken said he would try to work it in.

The kids said they were going fishing with Grandpa so we stayed at the house and watched golf when they weren’t around because the kids think its boring. Sydney came in to get herself an ice pack and said its because she tried lifting the 80 pound bags of cement for the tank they built.  I heard they got around 13 fish and 3 made it back for the kitties.

We went out and looked at the tank also. Then the kids showed us how they stick there heads in the natural spring which they said Glenda! You try it too! And I said no it’s enough for me to feel with my hand. (My Dad and brother had torn out an old rusty metal stock tank. It is a spring-fed tank and had water all through the last drought. They replaced it with a tank made from an old, huge scraper tire. This tank is in the Buck pasture, for those of you who know where THAT is.)

My brother said to the kids they needed to go to bed if they wanted to show us the zip line in the morning so they went off to brush their teeth. Then Ken asked my brother how do they stop on the zip line? He responded they hit a tree. That was enough for one night.

Right as everyone was going to bed, Sydney came out and said my contact cleaned amuses and entertains her because the bubbles float up from the bottom then lights went out and we crashed.

They showed us how they use the zip line in the morning. Their dad mostly stopped them before they hit the tree. It was much quieter after they left but far less entertaining.