More randomness and catching up:

We had our 18th wedding anniversary on the 24th of June, and we were in Hot Springs, we visited the Arts in the Park Festival, and while we did not purchase any art, we had corn dogs and I had a Sno Cone, which made my day. Quote from that day: “I bet I could eat five corn dogs if I tried.” Ken: “Let’s not.” 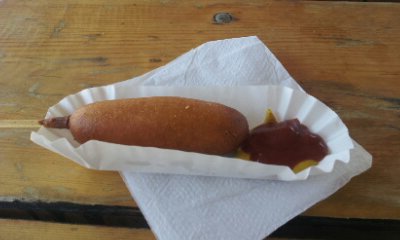 As we were getting ready for the trip – Ken, in a voice of disbelief “All these bags have to go?” 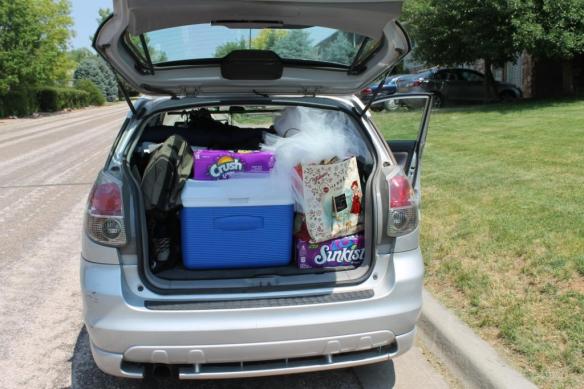 Of course, these pictures are at the end of the week, when I had acquired EVEN MORE stuff, because the pageant producer was going to toss all these bridal veils (just simple homemade ones, for a Lady Gaga production number) and I said – I have 6 nieces, please let me have those. Ken just rolled his eyes when he saw me marching out of the dressing room with THOSE. So those are ready to be sent off to enhance the dress-up trunks of the nieces someday.

My brother had my two oldest nieces and nephew up at Mom and Dad’s ranch, so they came down to Hot Springs to see the Miss South Dakota’s Outstanding Teen Pageant on Friday night, and we had dinner with them before the show. It was the typical dinner with three kids, kind of loud, eldest niece S. showed me a picture of her infected toe during the meal (I guess at least she didn’t show me the toe, I should be grateful….). I think they had a good time at the pageant, they were lucky, the a/c was working that night. I think my niece T. might be interested in competing at some time. S. and T. both are pretty and talented enough to do it, but it is not something everyone is interested in. Plus, I don’t know if my sister in law L. could take it if they were both competing in pageants. She gets migraines as it is.

I had the chance to run up to the ranch and see them again on the Saturday of the pageant. I dug into my closet and got out my Scarlett O’Hara prom gown from 1986 and gave it to the girls for their theatrical performances. (They know “Wicked” by heart and like to act it out.) I think my mom was kind of dismayed, but I was pretty sure I was never going to wear it again, and it wasn’t doing anyone any good hanging in the back of the closet. I did have to replace the elastic in the lace around the shoulders, but I made quick work of that. 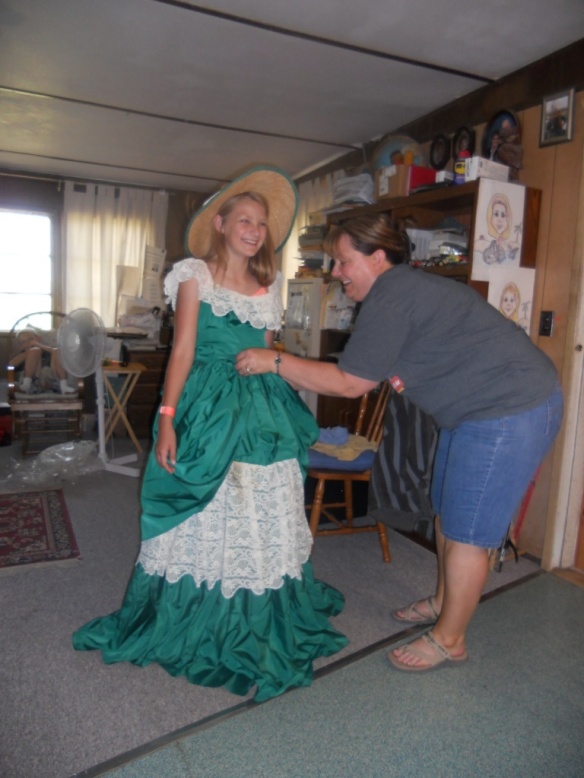 Me helping T. with the dress. It has several pieces. We didn’t have the hoop skirt to go under it, but we had a small crinoline.

T. in the dress, S. in a vintage western shirt. She thought it needed fancying up, with some Sharpies and some color, I said, “No way!”

Here I am in the dress, ahem, SEVERAL years ago.

Note how I am posed with the deer horns coming out of my head, oh so lovely.

3 thoughts on “New Life for an Old Prom Dress”