We had stuffed shells for dinner Saturday night, sorry, I forgot to take a picture of them, and the recipe for those is pretty much different every time. It involves a lot of cheese, a homemade marinara that has a variety of things thrown in it, and pepperoni laid across the top layer of cheese for the last 20 minutes to brown and get crispy. And the leftovers are awesome.

I forgot to say that at the Bagel Deli, Ken and K. had a french dip and chicken salad, respectively. They both said their food was good, but S. and I were too entranced with our own food to even taste theirs (well, maybe S. got a bite of chicken salad???) and we really didn’t have time to take pictures.

After dinner we taught K. and S. how to play Progressive Rummy, which is the best card game ever and I would gladly type out all the rules, but maybe sometime when I am stuck in a car and don’t have anything to do, because they are kind of complicated and long. And S. lulled us all into a sense of complacency and then tried to go out early about three times in the final hand, and still was the first one out and cleaned all of our clocks.

Got up Sunday morning and had waffles and bacon, and then took them for a scenery run. (Run in the car, not an actual on-foot run, oh that is SO funny.) We went up to Standley Lake, and wandered out onto the floating dock to take pictures. The lake was like glass that morning.

I forgot to pay sufficient attention to the reflections of the mountains and clouds in the water. There was a gentleman up there fishing, and some ducks swimming close to shore, egrets (I think) further out, and pelicans. S. is a little freaked out by birds so she was OK with the pelicans not flying too close.

Not much of this cottonwood is still alive, but it was a spectacular contrast against the blue sky that morning.

They we headed up Coal Creek Canyon, just to show off that hey, we live 20 minutes from the mountains (if not less) and because when you live here, you don’t go up into the mountains and appreciate them enough.

The Flatirons and just south of the Flatirons, and Jefferson County open space in the foreground. 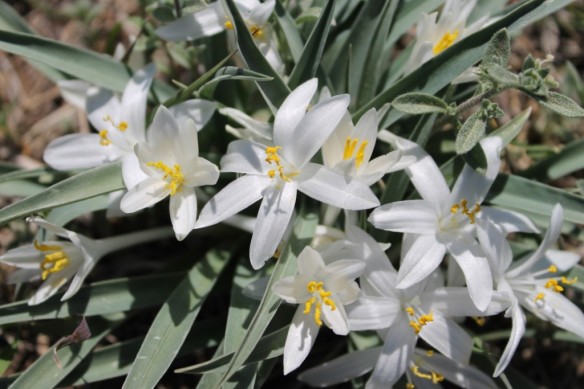 They have shooting star flowers here in Colorado too! At least that is what my family calls them. I had never seen them in Colorado before. They are a little more healthy and bushy than the ones in South Dakota.

Pose by the creek. I stuck my finger in the creek, it was pretty darn cold.

Awwwww. So happy for my friend K. that he and S. found each other. S. is my friend now too, but I knew K. for a long time before I knew her, and always hoped he would find the perfect partner. He has.

Then they had to head home, and I tackled the back yard. This involved spraying myself in the face with the hose accidentally, but if that is the only mishap for me with an afternoon in the yard, that is pretty good. Got 6-7 hollyhocks moved to a new place, plus a surprise peony that came up from an old root. Aggravated Ken by digging up two big rocks in the edging and leaving them on the grass. :  ) Went on weed patrol with my trusty jug of Round Up. Those rotten thistles that come over from the neighbor’s yard need strong measures. With all this nice weather in April I MAY actually have the yard in decent shape before I get tired of working outside in the heat and let it go to pot again. Who knows, maybe it will give me something to blog about if I keep it in decent shape, THERE IS ALWAYS A FIRST TIME!

I also tried starting a bunch of seeds in moist paper towels in ziploc bags. I put in a bunch that are kind of old so we will see if they sprout. If they all do, I am in serious trouble. So they probably will….

A preview of the current flowers:

And a happy, happy pink tulip. There may be a dandelion leaf in the background, but I choos to focus on the tulip! :  )