You know you have had a good time when a one day trip is blog fodder for 3 days.

Uncle Kenny, D. and S. fooling around with the electronics before dinner.

We had a reservation at Smokin’ Moes in Winter Park but we got there a little early and they fit us in early. We had the spicy sausage (which I did not find spicy, but you know me….) and onion rings (which were good) for appetizers. Ken and Wade and I had the ribs, sis-in-law L. and S. had the brisket. D. had chicken strip and and T. had grilled cheese. Maybe it was because I filled up on appetizers and cashews at their house, but I wasn’t wild about the ribs. Ken was though, and says they are just as good warmed up (he got my leftovers, too.) They did have excellent Texas Toast. It is possible to screw that up, so I appreciate it when it is good.

D. had a big rootbeer float. 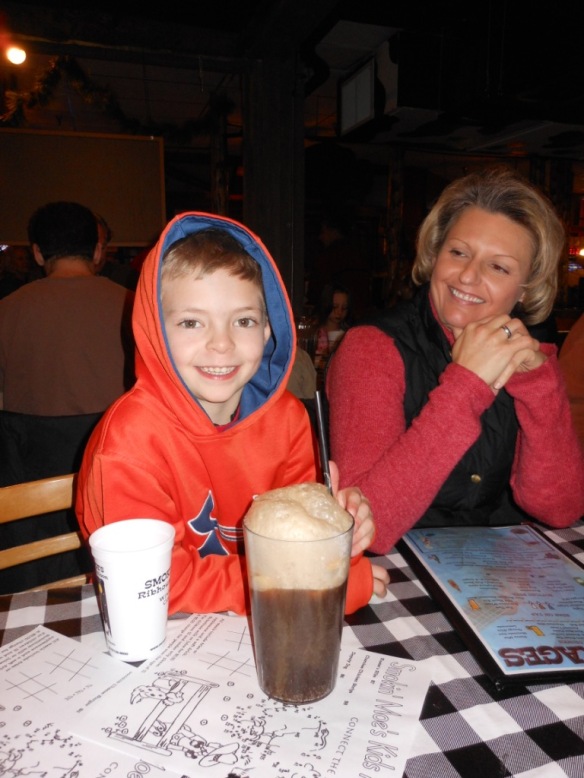 Ok, see that little white cup there? They give you those for water glasses, and you can take them home. So, sis-in-law L. was dumping out all of the water glasses into one of the big pop cups so they could take them home, and she dumped one that was not a water cup.

It was the kid’s menu crayon cup. Really, don’t they look festive in there? She was quite mortified. I haven’t been that amused since she spilled orange juice on my phone at a character breakfast at Disneyworld and the Mad Hatter came over and yelled at her.

Here is the whole family as Ken and I were getting ready to go, D. hanging upside down off the couch there. I forgot to get a picture of S. wearing the pepper print pants I made her for her birthday – they ended up fitting pretty well. And T. brought her poodle skirt along and I stitched the poodle down (it was an iron on and it was coming back up), so that all worked out. It was great to see them, sounds like they are coming out again over spring break so maybe we will get to see them again (kids want to go to Casa Bonita again, of course.)

It was an interesting drive home on all those twisty roads, and Ken pointed out that it would have been good to clean my headlights off, as they were rather muddy. But we made good time once we made it back onto I-70.

3 thoughts on “The Conclusion of the Winter Park Trip”