Are you ready for some more recipes? So far I have only published the successful ones. Well, the “Halloween Fire Chicken” doesn’t count. But that was more of a method problem than a recipe problem. Except maybe the recipe should say “don’t leave the hot grease alone for a second!” When I have some disasters, I will let you know. They happen on a regular basis. Recipe disasters, not kitchen disasters. Well, actually, both, I guess.

I LOVE the old church cookbooks I get at auctions and yard sales that have notations next to the recipes. “Not good” in some grandmotherly hand. “Better with pineapple.” So I have started making sure to write notes on mine, including the dates that I make them, so then I can tell when we haven’t had something for a long time.

So the new motto for the National Pork Checkoff is “Pork, Be Inspired,” and let me tell you, pork inspires me. BACON really inspires me. But pork loin, pork chops, pork shoulder, they all inspire me too. 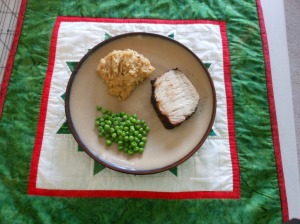 Please note the very nice table topper, you will get to see the whole thing when I do an entry about my Christmas presents.

I did not make any changes to it, so I don’t feel right writing the recipe out here, like I made it up. I will say that this works with one of the small pork loins too, except that you end up with a lot of rub left over and you don’t cook it for so long. I did it on our gas grill, and its idea of LOW is not very low, so when I browned the one side for 10 minutes it got a little crispy, but that was the fatty side, so I just scraped some of it off. There is a kitchen technique it is important to learn from your mother – scraping off the burned stuff. My total cooking time was MAYBE 70 minutes for 4 pound loin.

AND I cooked it to the new temperature rules, which specify a 145° internal temperature and resting for 3 minutes. My cooking of meat has improved noticeably since I acquired a good meat thermometer. (PS, those thermometers that have a long cord that goes inside the oven with a probe and keep the temp on roasts, etc? You can’t use those on the grill. In the directions, it says “do not expose to flame.” You should also read the directions. I have still not learned this after mumble mumble mumble years.) (There, that was a disaster. I destroyed kitchen equipment. A rather NEW piece of kitchen equipment, grrrrrr.)

Anyway, the first time I made this, I used a small pork loin, and second and third times, I used about a 4-pound one. (If I have made a recipe 4 times, that means it is good, AND Ken likes it.) I wrote a note on the recipe “large better” but I think that just means more appropriate for the amount of rub. And it lasted longer. I froze about half of it.

Savory Rice
(this recipe is from a cookbook “The Illustrated Encyclopedia of American Cooking” by Editors of Favorite Recipes Press) acquired during a very brief stint of my employment with a company that sold books door to door. “Sales” – not really high on my skills or enjoyment list.

Saute onion and pepper in butter; stir in all remaining ingredients and 1 soup can water. Pour into casserole (I used an 8 by 8 cake pan.) Bake at 325 degrees for 1 hour. (I am at high altitude and I had to bake a little longer.) Let stand for several minutes before serving. Yield: 8 servings.

I LOVED this, Ken says it was OK. He disapproves of the minute mushrooms in the cream of mushroom soup.

If you aren’t looking for recipes that include cream of mushroom soup, you are reading the wrong blog. Just wait until I post my “Beanie Weenie Cup” recipe, that is Haute Cuisine there.

Even then, he had big paws.

MaryAnne as a kitten: 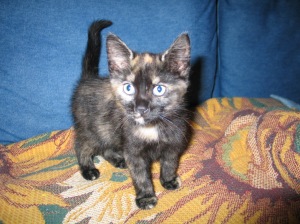 And her little stubby bulldog legs.

They were having a big fight outside the bathroom door this morning as I was getting ready for work. I kept hearing something thumping against the door, it sounded like someone was trying to get in. No, it was just them wrestling.

4 thoughts on “Pork: I am Inspired and Some Advice about Thermometers”