Well, an eventful-enough weekend. Woke up to snow, snow, and more snow again Saturday morning.  And MaryAnne, sitting on the window sill, looking out at it, licking the window, how festive. The newspaper in its plastic orange wrapper was barely poking out of the snow. And I, with my fabulous razor-like memory and organization, had left my snow boots at work. Eventually I put on DH’s snow boots and trekked outside to retrieve said paper, so I could continue my a.m. tradition of Diet Coke and newspaper, the breakfast of champions. 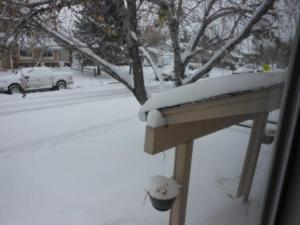 I needed to go out to the store to get additional potatoes and some other things for Thanksgiving Part II, but I wasn’t about to go out until the snow settled down a bit. So I worked on cutting out pants for DN 12 (birthday pants about 2 months late)  (with the help of the cats, of course), 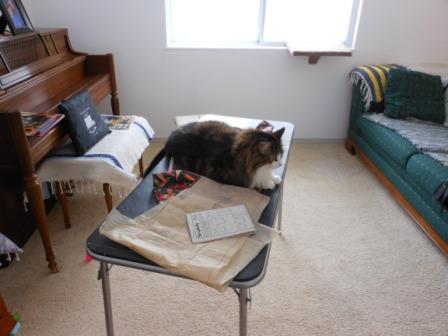 sewed a little on my color class project (taking a quilting class based all on color theory), sorted clothes for DH to wash, looked out at the snow and complained, and did some family phone calling that needed to be done. Made beefy harvest soup for me for lunch http://www.txbeef.org/recipe_book/soups_stews_and_chilis/beefy_harvest_soup and Oriental Beef and Noodle Toss for DH (a recipe which he inexplicably likes, I sometimes hit on the oddest things that he actually enjoys. Unfortunately, I do not enjoy it much (not spicy enough)).(Recipe I have scanned in from a cookbook and saved to the computer in an effort to narrow down the cookbook collection.)

So that was a kitchen disaster, making two things at once with multiple ingredients, stuff all over the place, but that is kind of the way I cook. Thinking about things, I came to the conclusion that I needed to cook the turkey that night, because Sunday we were going to be going to a Christmas party, and I didn’t want all that hassle and clean up and being exhausted and too full before the party. So, when the snow quit (about another 6 inches, thank you very much, 2nd snow storm in 3 days), I struck out to the store, which was busy with everybody else who had the same idea.

Of course, just going to the store has to be eventful, so I locked myself out of the house. I had run back upstairs to grab my reusable bags, but did not grab the keys off the hook like I meant to. I shook my coat to see if the keys were in it, and the zipper jingled, so I thought I was good. When I got to the car, I discovered I was NOT good. In a combination of events that only seems to happen in my entertaining life, the husband had announced that he was going to take a LONG hot shower after shoveling the walk/driveway. So of course, him getting in the shower coincided with me locking myself out of the house. Oh hey, I have a brilliant idea, I will go to our neighbors across the street who have a spare key. Well, none of them are home, except for Lucy the cocker spaniel, who looked a good deal like she would enjoy giving me a good ankle bite, but she wasn’t going to get any key for me.

So I stood on our porch, peering in the door window, hoping to see some sign of DH emerging from the bathroom, and pounded on the door/rang the doorbell approximately every 60 seconds. I am sure the cats were freaking out, because they always panic and hide when the doorbell rings.

After about 10 minutes of this (fortunately I was dressed warmly, and the sun had come out and it wasn’t CURRENTLY snowing), our neighbor did come home and I retreived the spare key, zipped into the house for my key, yelled to DH that I had been locked out, and headed off to the store. Fortunately, I only had 4 things I wanted to get, and I managed to remember all of them. Unfortunately I forgot to even think about getting that throat anaesthetic spray to deaden my sore throat, but I seem to be getting over the evil cold/sinus thing slowly.

Stopped at Starbucks to get hot cocoa for DH and I because I am such a nice wife, but what I really needed at this point was a shot of Baileys or Jagermeister in mine.

By the time I got home, it was time to get the turkey started if I wanted that to get done, so I wrestled it out of the bag. I have a nice roasting pan but if I use that for the turkey, I can’t fit any other pans in the oven, so I stuff the 12 pound turkey into a 9 X 13 cake pan. It fits nicely. http://www.cooking.com/Recipes-and-More/recipes/Herbed-Turkey-Breast-recipe-6775.aspx I do remember to remove the neck and giblets, because I have plans for the giblets. I throw the neck in the pan to roast along w/the turkey, it will get boiled along w/the carcass to make broth.

Later I peeled the potatoes and got them boiling, blenderized the raw giblets for the stuffing (that is the way my Grandma used to make it, I am trying to re-create it, it is a different taste but it grows on you.) I wonder if she always used the gizzard, that doesn’t seem to blenderize very well. Mmmmm, delicious giblet smoothy. (Not really, I didn’t taste it, I was trying to not even smell it….) With a couple of eggs, added to the usual bread crumbs, onions, celery, and seasoning, this is the traditional family recipe. Potatoes get mashed, along with cream cheese and I show great restraint and only use 1/2 stick of butter. There is butter in the stuffing too, and I basted the bird with butter, so I tried to be frugal in the mashed potatoes.

So I am whomping up the potatoes in the KitchenAid stand mixer, and they are about done, but then I start to hear really bad noises from the trusty KitchenAid, like the beater is whacking into the side of the bowl. I stop and look and think *(&()*&*&^(* this will be the 3rd kitchen appliance to die in a month, bloody hell, and try to adjust it. Still whomping. Oh well, figure it out later. So when DH goes to dish up his potatoes, he gets a big chunk of white metal on his plate, the cover to the place where the attachments can go on the front of the mixer has fallen off and that is what is making the noise, thank goodness. Now I just need a new Crock Pot (handle disintegrated) and food processor (broke the lid). Although I am going to try to order a new food processor lid, their website says “not available online, please call us,” I consider that to be a really bad sign. As in, we don’t have parts for that bloody thing, it is so old (about 10 years old, I think…) go buy a new one.

The adventurous part of the turkey was getting it from one pan into another so I could easily get the pan juices to make gravy. I have a baster, and could have retrieved the juices w/that, but it isn’t really that functional, I have had it forever, maybe there is a better design out there now……So I grabbed my nice new tongs from IKEA a few weeks ago, and my giant grilling tongs, and I manhandled that baby over. No disaster, surprisingly. The only treat the cats got was when I dropped the basting brush onto the (relatively clean, before that) floor and spattered butter and herbs everywhere. 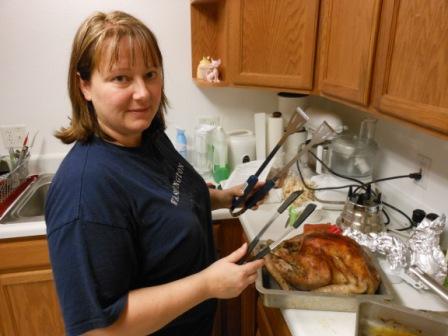 The proper tools for turkey transfer.

Altogether a good meal, although I accidentally opened up creamed corn instead of regular. Didn’t get around to making sweet potato casserole, can make that some other weekend, or scalloped corn, but DH won’t eat either of those anyway, so I will make them some weekend and take them for breakfast at work all week.

I knew I wanted to get up Sunday morning and clean up the kitchen (did you think I cleaned it up Sunday night after dinner? Ha ha ha ha ha.) So I did that, alternating cleaning with reading the paper. Made a new ranch chicken recipe http://www.food.com/recipe/crock-pot-cream-cheese-ranch-chicken-147494 in the mangled crock pot for lunch, didn’t want to eat too heavy as we were going to a Christmas party this afternoon and I knew there would be good appetizer-y food there. Ran out to look for new jeans and found a fleece top that will be good to wear this winter if it is going to snow 3 times every &*^(&*^^%$^ week, and my throat spray that I forgot the day before. And I did a little sewing, and we (mostly DH) watched the Broncos, and I tried to nap, and MaryAnne work me up, scratching on the carpet, playing with a hair elastic, I have no idea where she got that. Little brat. Scritch scritch scritch scritch, on the carpet, and she has been digging up the carpet by the bedroom door so I assumed that was what she was doing, and I stomped up to check, and NO, she had the hair elastic, and we don’t really need for her to be eating that. And then she demonstrated to me how she can jump up ALL the way on TOP of the entertainment center, I didn’t want to know that….

We went to the Christmas party, and it was lovely, but I really think I did too much this weekend and I probably should have spent more time trying to recover from being sick so I am OK at our work convention this week, I may be paying the price by Thursday. And the weekend ended like it began, snowing like crazy, oh the joy.