I need to make a note for the future that day 4 of vacation is the day we will need a nap in the afternoon.

Headed out for breakfast at 8 at the Lighthouse Café, I had read plenty about their whole wheat blueberry pancakes on TripAdvisor, so that is what I had to order. I usually not a sweet breakfast person, so this didn’t really do it for me – had to order a side of bacon to get some protein. And Ken had to have bacon with his pancakes because, well, that is what he does. Did not have a mimosa this morning because I decided that was what was making me too full. The Lighthouse Café is appropriately decorated with all kinds of pictures of lighthouses from around the world and we had fun looking at those and finding the ones in Michigan we remember from living there.

Then we headed over to the Dunes Golf Club, Ken to golf and me to ride along and hopefully see interesting wildlife. We were paired up with an older gentleman who still lives in Vermont 8 months of the year but he and his wife then come down to Sanibel for 4 months of the year. That was kind of nice because he knew all the holes and gave Ken pointers. And kept close track of the scores.

We did see a small gator on one hole, but the sign warning you to enjoy them at a distance was almost as enjoyable.

Saw a spectacular eagle/osprey mid-air fight with the eagle trying to get a fish away from the osprey. He did finally get the osprey to drop the fish in the water and he snatched it up. The tour guide at the wildlife park says this is quite common behavior for eagles. Saw lots of ibis and cormorants, and a great blue heron and two big birds I am referring to as storks for now because I couldn’t find any other pictures of them (after searching I am pretty sure they are wood storks). Ken liked both courses he played here but he lost less balls on this one. 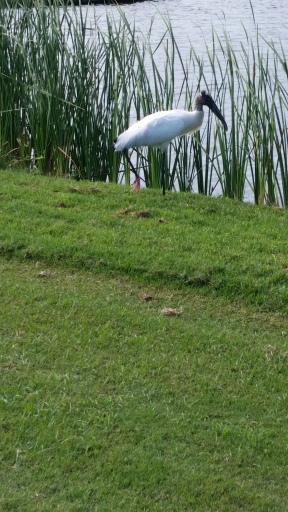 We went to Sanibel Fish House for lunch – I had conch chowder and oysters coquille. They were both fine, but it seems to be a consistent thing on this island to not serve things very hot – the oysters in this case. And I realize they are catering to the general public but I would really like some big chunks of conch in the soup, not little shavings. I know conch is extremely chewy, but if you cook it long enough you should be able to have chunks….perhaps this is something I need to try and make myself, but I don’t think I have much access to fresh conch in Colorado. Ken had a chicken Caesar salad, after I talked him out of cheese fries (since he had been complaining about being so full after all the big meals and having heartburn….) 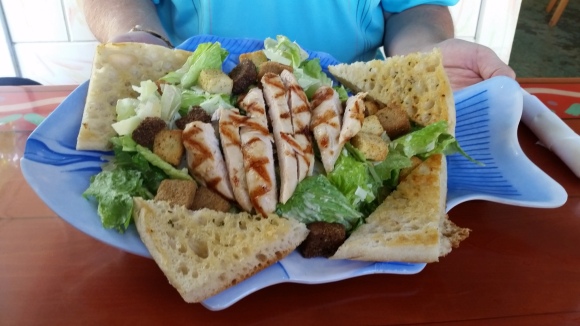 Note the fish-shaped plate for the salad.

And then we went back to the hotel and crashed. We both napped. I think we had hit the vacation wall, especially after being out in the heat and sun all morning. We just took it easy after we woke up but did go out to see our last Sanibel sunset.

We sat and watched the sunset and birds and people and the brown pelicans dive bombing for fish, and then we saw a bunch of osprey also fishing, so we watched them for quite a while. It had had been windy for the last few days, and we hadn’t seen any of the no-see-ums (sand fleas? Biting flies) that I had read complaints about. Well, they were out in full force that evening, and I apparently am quite tasty, because Ken had just a few bites and I have about 40 on each leg, and apparently I am a bit allergic to them because they are quite red and itchy, still, 4 days later.

Went to Matzaluna’s for dinner – the secret seems to be to go to dinner pretty late if you want to miss the rush. We went about 7:30 and were seated by 8. Ken had pepperoni pizza and I had guava salmon – it was fine but not “different” enough for me – if you couldn’t tell, I am all about the unique and new tastes. Ken had a pina colada and I had a strawberry daiquiri. 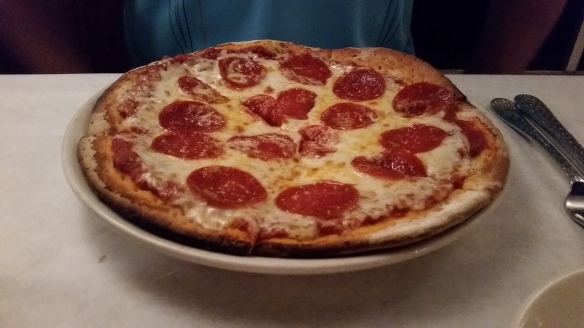 And then we went back to the hotel and started getting organized to pack….sigh…..

A few more pictures that Ken got edited: 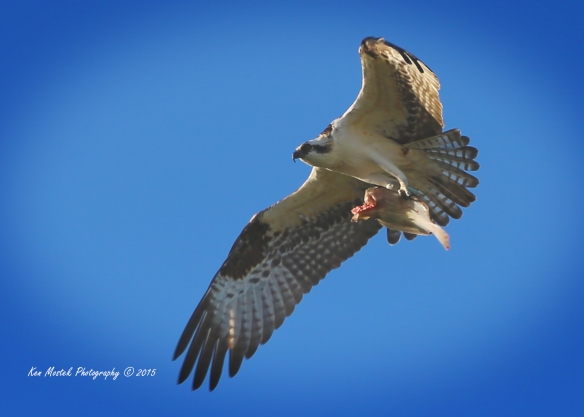