After the great yarn adventure, Travis from Paradise Fibers dropped us off at the Riverfront Park and we went immediately to the shaved ice booth and had shaved ice. I had half strawberry and half huckleberry and it was excellent. Next time I will have all huckleberry.  Huckleberries are a big thing in Washington and Montana, there are many huckleberry products available. The shave ice came in a large plastic flower-shaped protector, so you wouldn’t get it all over yourself, of course I saved both of ours to put in the “Costume Trunk.” Someone will think of some way to make them into a hat or something.

There was also a mini-donut booth in the park but it was closed at that time.

They have a Skyride gondola that takes you out over the Spokane River Falls, and we decided to enjoy that attraction. Fun to travel with a board member who wants to go out and visit the local sights. And is willing to walk miles to a yarn store. There is also a train ride around the park where there is narration about the area’s history. The World Fair was held here in 1974. It is a beautiful park in the midst of the city, lots of trees, very cool. AND mini-donuts and shave ice. They also have an antique carousel and an open fountain where kids (and adults) can get wetter than a trout (or a salmon, more correct for the area) but we did not partake of those attractions. Also: a giant red wagon with a slide for kids, and a garbage eating-goat sculpture (must find that sculpture in the next few days, as my friend Cathy mentioned it in here Spokane memories.) 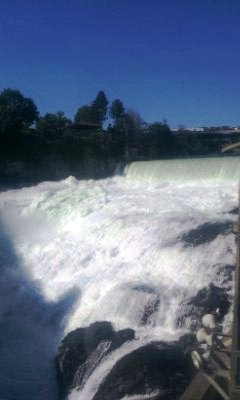 One view of the lower falls from the Tram ride. It was late in the afternoon so we had some shade from the art deco Monroe Street bridge. This is a very cool bridge, which includes cow skulls (or buffalo?) as part of the decoration. Not real ones. Cement ones.

This is that bridge, you can kind of see the cow skull at the top of the tallest part. 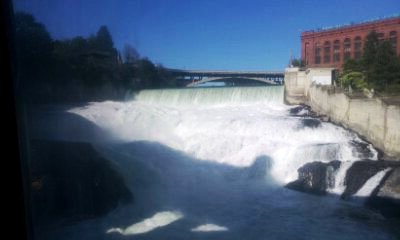 This was the location of the original power plant that provided electricity for the street cars in the early 1900s, and there is a modern hydro power plant there today.

After the tram ride, we walked back to the hotel to meet up with my boss for dinner. We are staying in the Davenport hotel, which has two buildings – an historic building, and a more modern “Tower” across the street. We are staying in the Tower. Beautiful, large rooms.  It has kind of a jungle theme, hence the leopard-skin chaise lounge. The historic building has been restored extensively and maintains all of its beautiful frescoes and interior details. The rooms are large and comfortable and very nice. 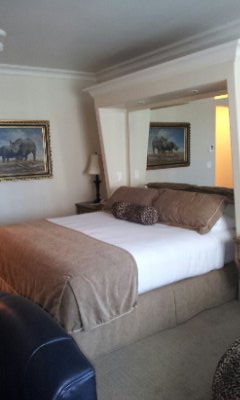 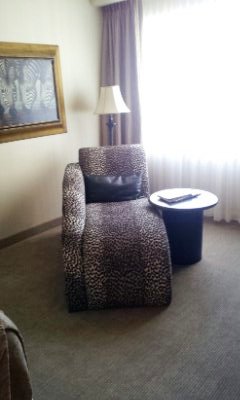 Rather than a bathtub, there is a large walk-in shower.

They also give you a small sample of two kinds of “Soft Peanut Brittle” which is apparently a Spokane thing – one with chocolate and one without. And they give you fresh ones each morning. Mmmmmmmmm.

The bed has a mirror on the wall behind it, which does make the room look larger and is pretty but can be startling when you sleep on your stomach, and wake up in the morning and wonder who is looking back at you.

We decided to eat at the Palm Court in the main building of the Davenport. We got to sit at one of the tables in the sky-lighted lobby and admire the surroundings. 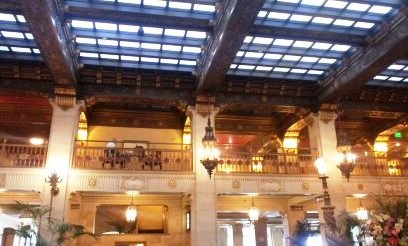 I had perhaps the best caprese salad I have ever had, local heirloom red and yellow tomatoes, mmmmmm. 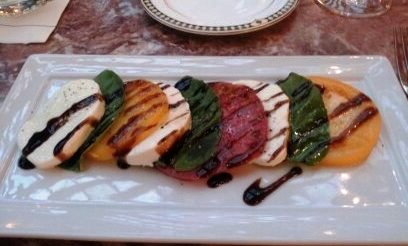 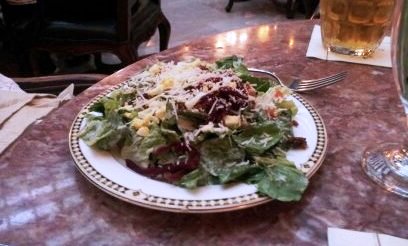 I had the coconut prawns as my entrée and she had the salmon. 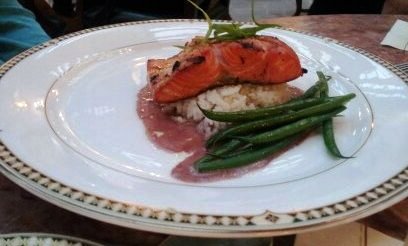 (My boss had the house salad and the prime rib, but I didn’t take pictures of his.) I think both S. and I thought our entrees were Ok but the salads were the best part of the meal. I had the Huckleberry Riesling, by Latah Creek, which was lovely.

By the time we finished dinner, it was after eight, which was after nine Colorado time, and we were tired out for the day, so headed back to the rooms to sleep.