Despite having arrived home from a work trip at 12:20 the night before, I was awake at 4:30 a.m., managed to go back to sleep until 6:00, and finally gave up and got up at 6:30. I caught up on Facebook, going through the feed from the day before because there were several articles/links I wanted to bookmark, and I had them all open on my phone, but then I had to turn my phone off because it wasn’t receiving emails in the middle of Eastern Colorado, and it lost them all. So I think I found most of them again.

I tried to pack quietly and let Ken sleep. MaryAnne was not helpful, she had come to bed at about 5:30 to snuggle in crook of my arm and then gave me a chirp meow in rebuke every time I moved. She was very chatty all morning, I think she knew something was up. They know when they see the big black boxes on the bed, they are going to get cat-sat for a few days.

After Ken got up and ready, we had a debate on which way we were going to go to the Great Sand Dunes. He had been intending on going down I-25, which would probably have been faster, not because of the road necessarily, but because there were less distractions to cause me to want to stop. But I thought we should go down 285 through the mountains so I could see some scenery I had never seen before. I always believe in traveling the road I haven’t traveled before.

So off we went, after a stop at the library to get fresh library books for me and Walgreens to get Sudafed since my allergies have been going nuts. I had originally hoped to get out of town by 8:00, but that was before I knew I would be getting home at midnight the night before.  So my new plan was 10:00, and we were pretty close to that.

Off we went into the mountains, with Ken providing narration about all the reasons he had been to these small towns in the mountains for news stories when he still worked for the news station, pointing out the gas stations they had eaten at and the restaurants they would have eaten at if they would have had more time.

I knew that Colorado had a hot-dog shaped restaurant at one time. It was once on Colfax Avenue in Denver, and then it got moved to Aspen Park, and I had heard on a news story that they had lost their location there and were moving again, but I thought the last thing I heard was that it was no longer open. Well, imagine my surprise when we drove by it! I made Ken turn around. If I have a chance to eat in a giant hot dog-shaped restaurant, I am going to take it. 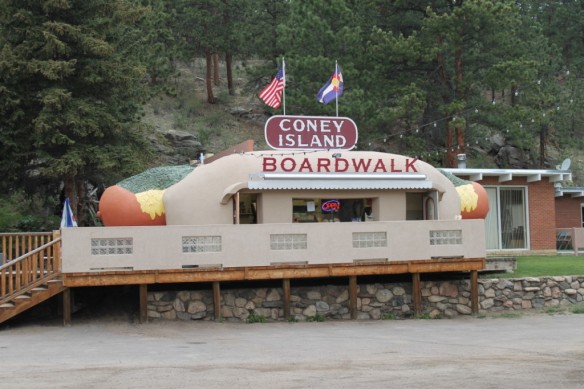 We both had brats but I had onions and peppers and mustard on mine. They were good but I wish they would have cooked them a little longer, we like a little snap to the skin. We got there just in time at 11:30 because then people started streaming in. 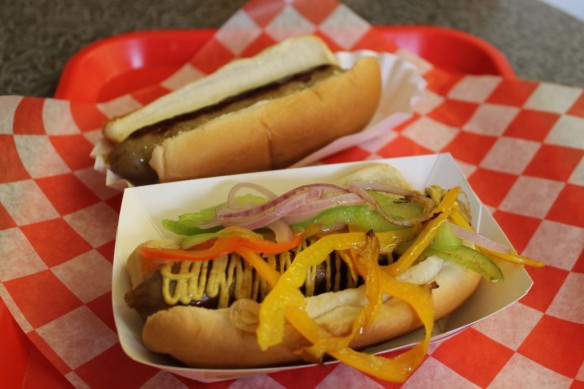 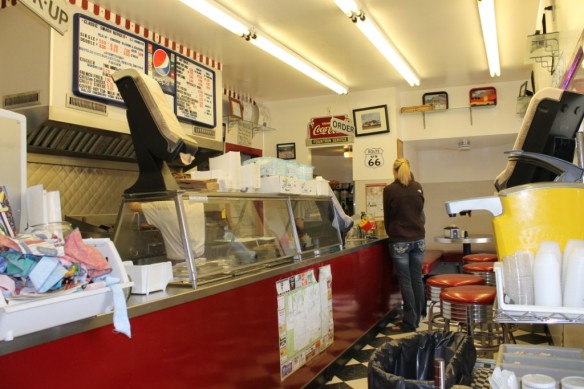 They also had a hummingbird feeder outside, and two hummingbirds cheeping angrily at each other as they fought for position. They apparently don’t know how to share. I did not get a picture of the flashy blue one, which was probably the male. They get really upset and territorial – Hummingbirds: The Original Angry Birds.

There was still snow on some of the mountain peaks. It was a pretty cool and cloudy day, although it got sunnier as we got away from Denver. The drive into the South Park Valley was pretty incredible, just like the NY times writer says in this article, it is mind blowing to come out of the mountains over Kenosha pass, and see this huge valley as far as the eye can see,  surrounded by mountains.

Saw a coyote run across the road while were were in the valley, also goats and alpacas (not wild) and many hawks.

As we got further south in the valley, there were lots of farms under circle irrigation, and the wind kept blowing harder and harder. Saw at least four giant dust devils form and some of them stayed intact for quite a while. Saw Colorado Gators attraction but decided to save that for another trip.

We got to the Great Sand Dunes around 3:30 in the afternoon, and  the wind was blowing like crazy. I think the lady said they had a 42 mile an hour gust. That is something when you are surrounded by sand. We looked around the visitor center, and then did venture out onto the flats before the dunes, but we were just getting sand blasted, and discussed that it might be a good option to come back in the morning when it was still. There were some people up hiking on the dunes, but I am pretty sure they weren’t having a fabulous time.

And no one is up on the very tops. 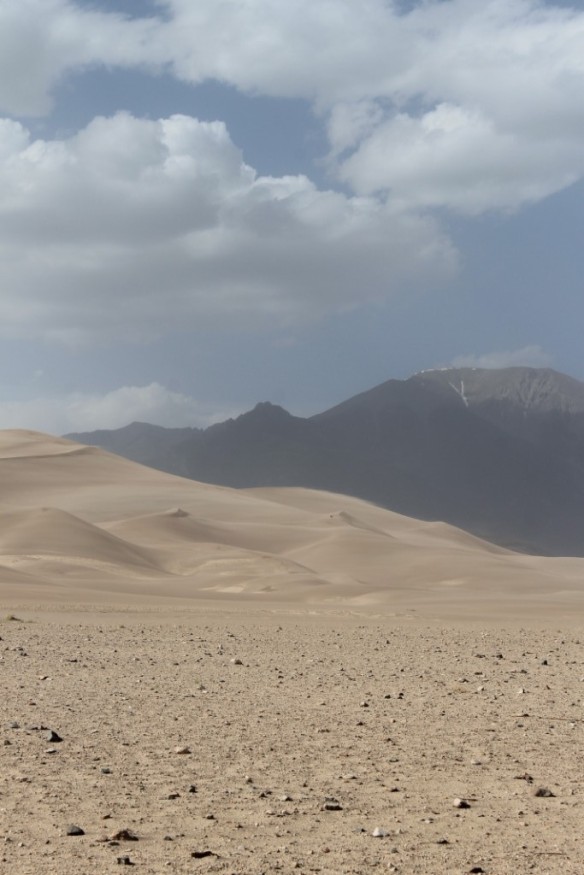 Ken had sand in his ears, hair and shoes. I had it mostly in my shoes, but still some in my hair and ears. We were really hoping that it would be nicer in the morning. The weather was really strange, cloudy but not rain clouds, and hazy, which we found out was probably caused by fires in NM and/or AZ. We didn’t even get to see the sunset, it was too cloudy.
We got to the Best Western Movie Manor in Monte Vista at around 5:30 or so and checked in. This hotel was a little bit out of our way but when you have a chance to stay at the Movie Manor, you better take it. We were in the Jodie Foster room. This is an older hotel but has been updated throughout the years. 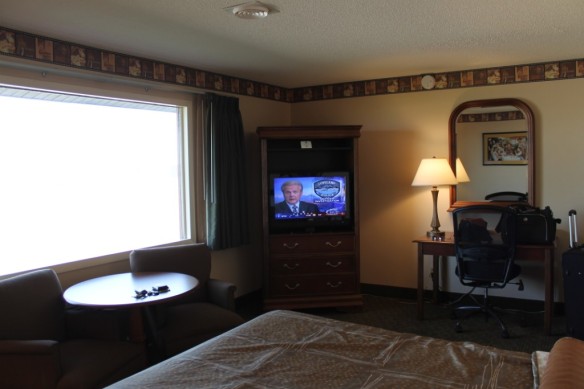 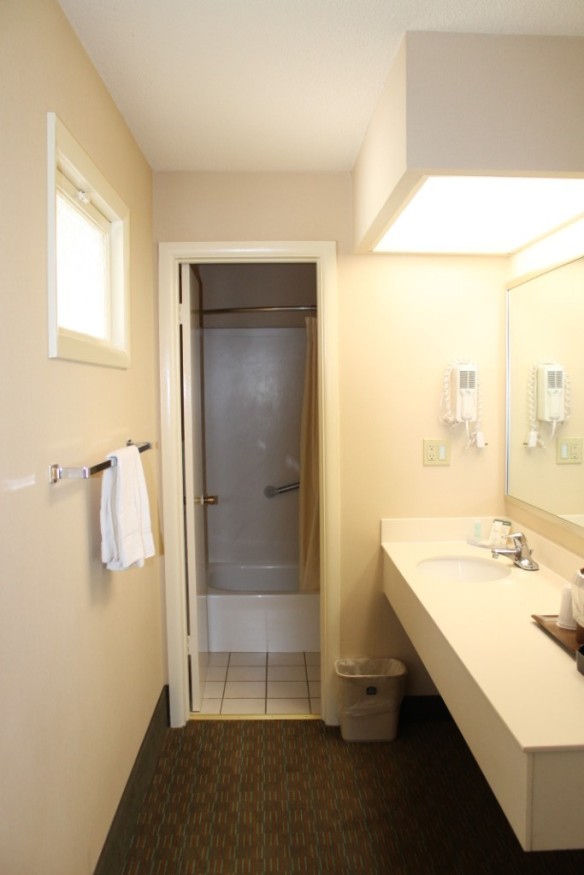 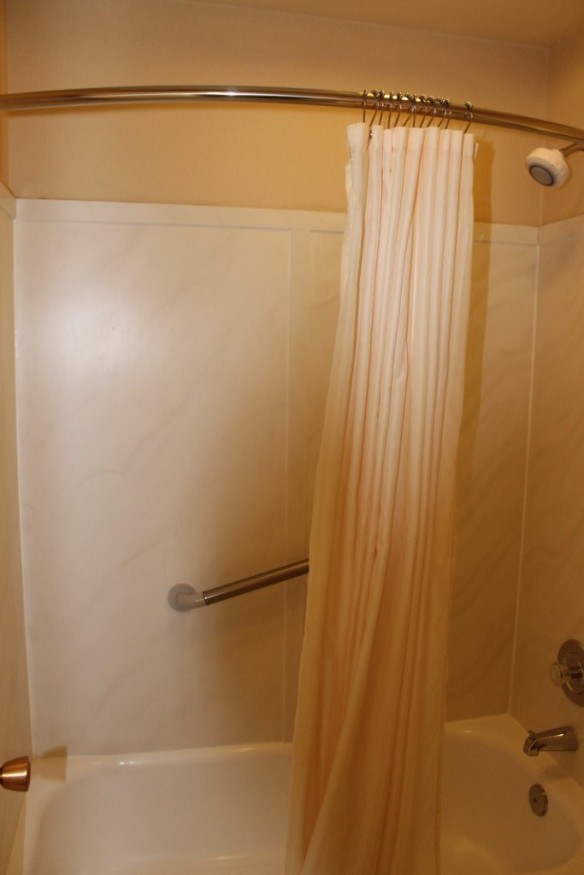 Except for the fan/light switches in the bathroom which they have kept intact, which I find quite charming.

The rooms and the whole place are decorated in a movie theme (pictures, wallpaper border), because the rooms look out on the drive-in movie theatre next door. We emptied most of the sand out of our shoes and went to the Mountain View Restaurant for dinner – we asked the front desk clerk for a steak recommendation and that was her recommendation – OR the restaurant next door owned by the same family that owns the hotel. We thought we would spread our tourism dollars around and went to the one across town.

Kenny ordered the 8 oz sirloin and I got the sirloin steak sandwich, because I knew I would get the smallest piece of meat with that and I didn’t want a huge steak. We also ordered the chips and salsa. The chips were not real fresh but the salsa was good. 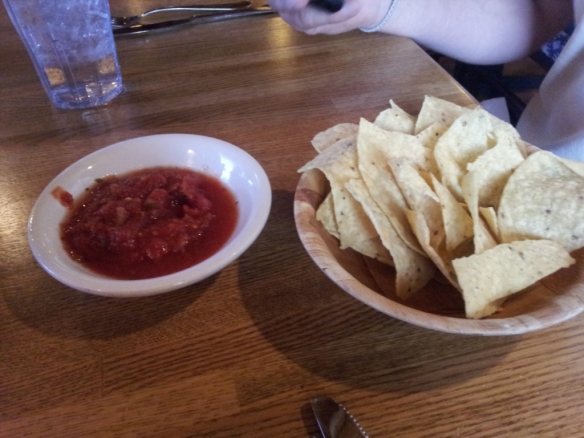 We both liked our steaks. I went with the add-on onions and mushrooms, of course. They came with a dollop of seasoned butter on top and Ken frowned and scooped his off.

We both had dinner salads, not bad, mostly iceberg. Ken also got vegetables with his, of course he didn’t eat the zucchini and I got that. Was thinking about pie for dessert but when the waitress said it wasn’t homemade I decided to pass.

Of course, being the Nosy Parker that I am, I overheard our waitress describing Shock Top beer to the table next to us, and she didn’t mention that it was a wheat beer, so I had to throw my two cents worth in on that. We then visited with the two guys at the table on our way out, one of the was wearing a CSU hat so I asked if he had gone to school there. Nice guys. They did ask if we had gone to Gatorland and said it was worthwhile, so I will have to check that out for next time.

Got back to the hotel in plenty of time to watch “The Lorax” on the drive-in screen, but neither one of us had any desire to actually watch it, so we did for long enough to say we did it, and closed the curtains and turned on the TV.

Their beds are very, very soft.  Some people might like that, but I was glad we only had sleep on that bed for one night.

Did not get any embroidery or knitting done as we drove today. Way too much to look at, almost all areas I have never been to before. Great day.