Lucky enough to have a date night last night with my husband. I got out of work a little early and drove to downtown Denver, and we enjoyed Happy Hour at The Corner Office close to the theatre, and then went to Wicked. At The Corner Office, I had the Sonoron dog (bacon wrapped hot dog with baked beans, guacamole, salsa, crema, cojita) (the baked beans kind of overpowered everything else, but it was good) and Ken had a burger, and we shared the poutine (I don’t think I have had poutine before, it was excellent.) 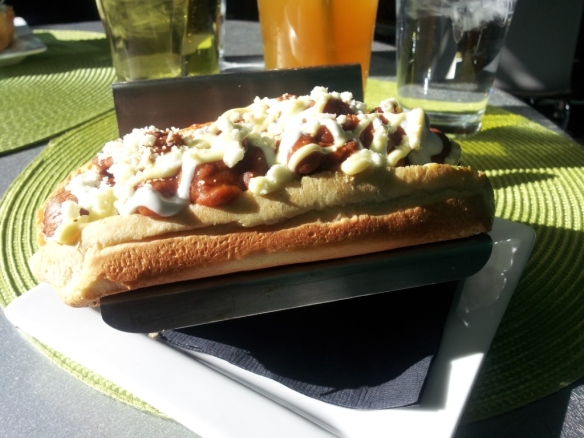 I had to have a Dark and Stormy, in honor of my friend who always has one when they are on the menu, even though they were not on the happy hour specials. Tasty. Gingery.

Then we walked down to Crave, a dessert bar. Ken had a cookie from there that afternoon. Well, they had macarons! Not macaroons, those have coconut, and they are easier to find, but French Macarons, which are meringue based, difficult to make, and difficult to find. So I did a happy dance and ordered one of each flavor.

I was so excited about the macarons I left my phone there and we walked all the way to the theatre and then had to go back and get it.

Wicked was wonderful. However, I was not going into the evening expecting a show that would remind me so much of my college room mate and best friend, who was killed in a winter/ice car accident our senior year. We didn’t originally start out as room mates, but hers moved out and I wanted to get away from mine. Our dorm director was a little reluctant to do this, because I think he thought we were going to be trouble, and he was sooooo right. We were a force to be reckoned with when we were together, mostly be being crazy and nutty and off the wall. So when Glinda and Elphaba became friends, and then they were saying goodbye and singing “Changed for Good,” I lost it. Especially since I had been at a funeral that afternoon for someone else who had died too young. Oh, it wasn’t good. I can’t watch the movie Beaches, and I don’t know if I can ever see Wicked again. Maybe now that I know what is coming I will be ok, but it could also be worse. Which is too bad, because it is an amazing show and an wonderful, innovative story. It was totally a Rebecca and Glenderella show.

3 thoughts on “Wicked and the Corner Office”