I warned you: I am on travel, and the cumulative exhaustion from all the travel this month has led me to post my trip reports from Thanksgiving 2010 while I am on my latest trip, rather than writing fresh. Not everyone has read these, and I still enjoy reading them, so I hope you do too. This first day doesn’t have any pictures but the rest of them will have pictures.

Links to all of the trip reports from this trip:

Well, how about one iconic San Francisco picture: 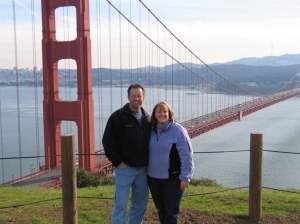 Leaving Denver: Got up at 5:00. This is not a good time for me to get up. Clamped my finger in the curling iron instead of my hair. That left a mark. Got to the airport and parking was kind of goofy, they have no signs for the Mt. Elbert parking lot, but apparently that one was full anyway and we followed the crowd to the Pikes Peak lot. Lots of cars but the airport had staff there directing traffic. Pretty full bus to the terminal, I was amazed at the number of people flying today. Security wait was pretty long, but it kept moving along. Did not see a lot of people getting pulled out and groped, but the lady in front of us who was apparently wearing ALL of her favorite jewelry and had to go through the metal detector 5 times was pretty annoying. Got there with plenty of time for me to go out to concourse C and get my breakfast calzone that is Tradition, but their quality has decreased, might have to get something else next time. Plane was full, and numerous kids that weren’t thrilled to be sitting still for 2.5 hours, but they were really pretty good. Kenny slept part of the way and I watched TV and knitted, although I discovered I dropped a stitch several rows down (sticky yarn, so it didn’t unravel) but it was going to drive me nuts so I had to unravel about 20 rows to fix that, so I didn’t really make much net progress. Lovely weather of about 18 degrees when we left.

San Francisco Airport: First off our plane nearly ran into another one on the taxiway. Not sure how close we came but the pilot slammed on the brakes. Don’t know if he was supposed to yield to us or we were supposed to wait for him, but I am sure there was a report written up about this. He was just a little tiny United Express jet so we would have come out better in the collision, I am sure.

At the SF airport, there are apparently two sets of luggage carousels. Beware, your ride may go to the wrong one to meet you. Beware, there is not a lot of parking on busy travel days.  He  made his own parking place that he wasn’t sure we were going to be able to get out of, but we did. Pretty drive in from the airport to their house, lots of gawking around at the scenery. I was unhappy on the bridges that they put the walls too high that you can’t see stuff. Brother-in-law Nick says, “They do that so you don’t go off of the bridge!”

On Thanksgiving, we hung out at the house and visited and smelled the turkey while it was roasting. Nick likes to make the Alton Brown brined turkey recipe. He couldn’t find any allspice berries at the store so decided to throw some fresh cranberries into the brine before he cooked the brine. If you do that, please consider that your turkey will come out of the brine bucket with pink skin. We really should have gotten a picture of that. But it did not stay pink, when it was cooked. It was very good. Sister-in-law April has a family recipe for mashed potatoes where you make them in advance, it involves a lot of butter and cream cheese, I believe, and that was delicious. There was kind of a pie crisis, because April wanted to experience making her own pie crust and then was not pleased with the results. Diagnosing the recipe, I think she has a family recipe (low in instructions, high on “everyone knows how grandma always made this”) that is meant to make 4-5 double pie crusts. So there was a last minute run to the store for pie, and gravy and stove top. Sorry, I come from a family that has to have gravy. (I remember how gravy was the main thing my brother would eat at most holidays). But really, I will admit, those mashed potatoes were so rich you wouldn’t need gravy!

So we ate and then got the phone call from the family on speaker phone. I think the kids were all running around playing so we didn’t get to visit with them. Ken’s dad had to give us his sales talk on some calendar lottery their church is running to pay off the mortgage, so both of us couples now are signed up to buy a calendar and win big $$ on a Sunday or Holy Day when they have a drawing.

Then we all pretty much went into food comas and watched TV and just relaxed and caught up.  There was reminiscing about last Christmas when we were all snowed in in South Dakota.  April and I pulled out the knitting and the crocheting. No games tonight, just went to bed.  Nick said we were lucky, it was an unusually clear and sunny day.